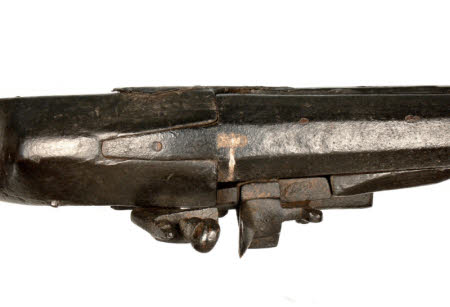 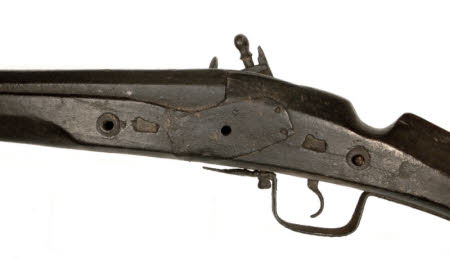 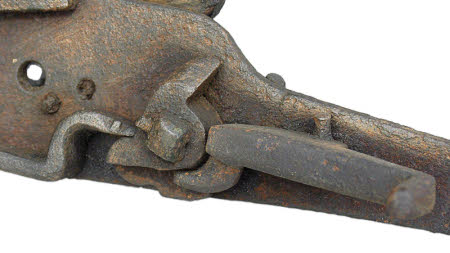 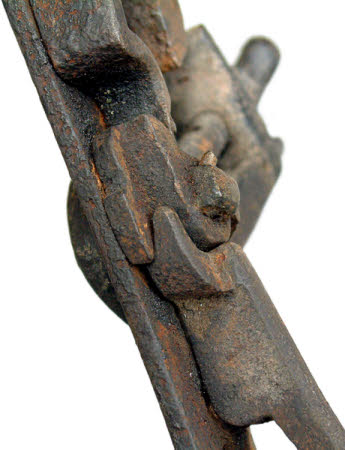 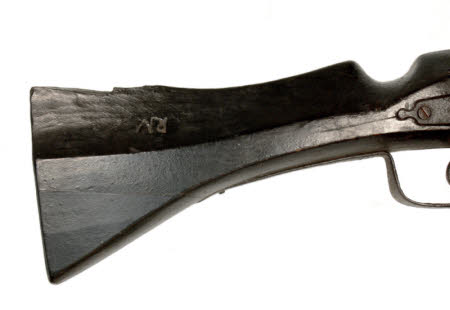 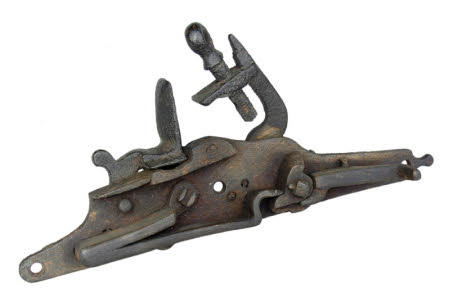 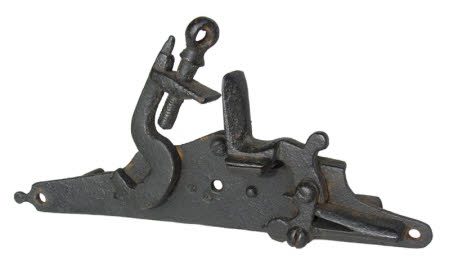 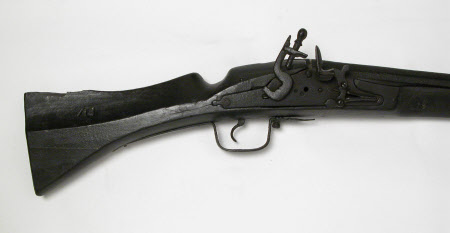 This is the oldest gun in Chirk's musket collection. The muskets were collected by Sir Richard Myddelton 3rd Bt, after the English Civil War. It is a rare example of an early English firing lock, rather than the more commonly found French style. It is displayed in the Cromwell Hall alongside other Civil War weapons and armour.

The thirty-eight muskets at Chirk are of great importance and as so few have survived, they are an almost unique record of English military muskets from the mid-17th century. The muskets are all flintlocks, with a mechanism of a type that was only produced in England and not used after about 1680. They are the largest known surviving group of their kind. The majority of the muskets date to the period 1660 – 1680, although two muskets are from an earlier period, one from the 1620s, the other from the 1640s, the time of the English Civil War. The Castle account books record that Richard Myddelton purchased the muskets in about 1679 from London, in order to decorate the Cromwell Hall, as a celebration of his family's involvement in the Civil War. The records show that the muskets were not in pristine condition and required considerable repair, with some needing new stocks and other components to be replaced. This, together with their relatively low purchase price, confirms that the muskets were old or obsolete when they were bought. Certainly by 1685, a newer form of flintlock, which was cheaper and easier to produce, was soon replacing all other forms of the mechanism in England, including those for military firearms.Two muskets, dating from the 1660s, are exceptionally large and are considered to be "wall or rampart guns". They appear to be among the earliest surviving English guns of this type. Rare military flintlock musket, English, c1640s. Heavy iron barrel, formed in 3 stages, octagonal at the breech, becoming 16 sided, then round to the muzzle, each stage separated by a turned moulding. Bead fore-sight; the rear sight missing. Retained to the stock by 3 barrel pins (missing). The ramrod missing. Barrel length: 121.3cm Calibre: 21mm. Wooden full stock, the “fish-tail” form butt of 2 piece construction with a thin upper comb (tip of comb missing) and formed with a deep thumb groove at the wrist. Stamped on the right side upper fin of the butt with the ownership initials RM. Old metal plate repair to the left side of stock. Most of forestock is missing. Iron furniture comprising; trigger guard with long lower tang and shaped front finial. English Lock (Type 1) flintlock with flat, trapizoide shaped lockplate, with long tail finial. Flat S-shaped cock, the top jaw missing. The top jaw screw is formed with ring top. The external buffer is missing; the frizzen has a narrow square top; there is a bridle between the frizzen and frizzen spring; the frizzen spring has a disc-shaped finial. Retained to the stock by 2 modern wood screws (original 3 sidenails missing). Overall length:157cm Brian Godwin, “The Chirk Castle Firelocks”, Canadian Arms Collecting Journal, Bloomfield, Canada, Vol.36, No.3, 1998. Brian Godwin, John Cooper & Michael Spencer, “The English Flintlock: Its Origins and Development”, 20th Park Lane Arms Fair catalogue, London 2003. Brian Godwin, “The Chirk Castle Firelocks – A Revisit”, Journal of the Arms & Armour Society, London, Vol.XVIII, No.6, September 2006. Brian Godwin, “English Firearms from the late 1500s to the English Civil Wars”, Royal Armouries Journal, Vol.10, No.1, Spring 2013, pp.51–70.