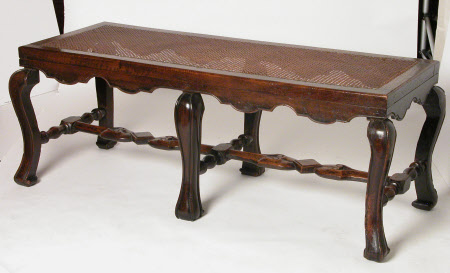 A long stool, one of a pair, and one of a set of three pieces of walnut, beech and cane seat furniture, English, circa 1715-25. The set comprising two long stools and one dressing stool. With caffoy-covered cushions and covers. With cane seat within rails of alternating convex and concave broken arches, and with an incised line near the edge simulating cockbeading. Raised on six moulded cabriole legs with scroll feet (unusually, the block at the top of the legs is concealed) with scroll feet. Joined by an unusual pair of stretchers formed from two pairs of scrolls, pierced and forming hearts, around a central lozenge, with three block and baluster-turned front-to-back stretchers.

This set of stools, together with a very similar daybed [NT 1147098.1] have traditionally been dated to the reign of James II (1683-5). However, the shape of the friezes, and the style of the leg, in particular, which takes the form of an angular cabriole, is only first documented in England from 1715 and so this cane furniture at Erddig cannot date from the late 17th century. This fits with what we know of the history of the house and its interiors, which were extensively refurbished and furnished by John Meller between 1714 and his death in 1733. The Erddig inventory of 1726 lists '6 cane squabs' and '14 large Cane Stools', as well as '2 Couches with Heads' (probably meaning daybeds) in the Gallery. It should be noted, however, that Louis Yorke (1863-1951) thought that they had come to Erddig in the 18th century, when the Yorke's London home was cleared of its contents and rented out. However, the inventory taken there in 1770 - furnished then in the height of fashion, and full of mahogany - includes nothing that could be these stools. Two of the stools have cushions and loose covers covered in 'caffoy', as do another set of chairs at Erddig (NT 1147097.1-7) which can be dated fairly precisely to 1720-6. Caffoy is a figured cut velvet with a worsted pile on a silk satin ground.