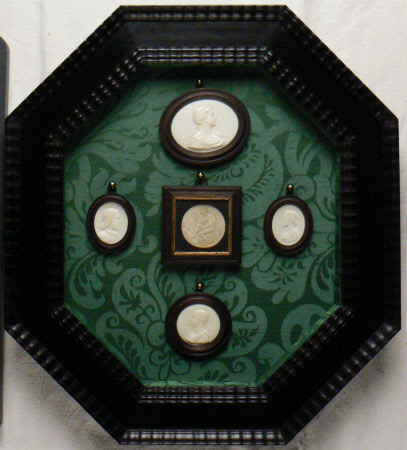 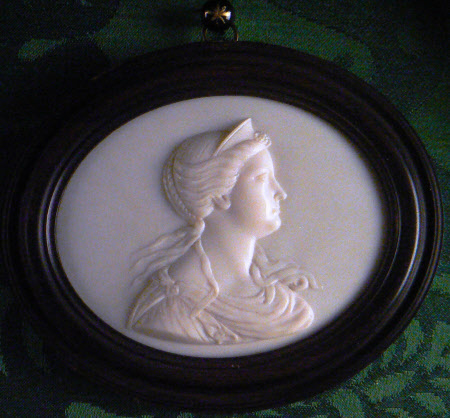 Ivory; portrait of Lady Grace Carteret, Countess of Dysart (1713-55); British; c. 1740-50. In the form of an horizontal oval ivory medallion, the sitter depicted in profile at bust length, facing to her right. One of five ivory portrait and subject reliefs within a single frame, in the Green Closet of Ham House.

A portrait of Lady Grace Carteret, Countess of Dysart (1713-55) in the form of an horizontal oval ivory medallion, the sitter depicted in the form of a classical bust, half-length and in profile facing right. She wears a loose dress in classical style, fastened at the right shoulder with a brooch. There is a plain diadem in her hair, which is elaborately dressed, plaited down the back of the head and flowing outwards in three strands. One of five small carved ivories in the Green Closet of Ham House, four of which are portraits of members of the Carteret and Tollemache families living during the first half of the eighteenth century (for the others, NT 1140225; 1140226; 1140227; 1140236). The identifications of the sitters are traditional, but there is some resemblance between the profile image on the ivory medallion and painted portraits of Grace Carteret (e.g. NT 1139647). It is likely that it is she who is depicted rather than her older namesake Lady Grace Granville (c. 1667-1744), the wife of George, 1st Baron Carteret. Lady Grace Carteret was the daughter of John, 2nd Lord Carteret, later 2nd Earl Granville. On her marriage in 1729 to Lionel Tollemache, 4th Earl of Dysart, the couple made Ham their principal residence. They had sixteen children, eight of whom survived into adulthood. Grace Dysart, described by her cousin Mary Delany as ‘very good-humoured and easy’, was an amateur artist, who made a number of pastel copies of portraits by Van Dyck, Lely and Kneller. The four portraits of members of the Carteret and Tollemache family are somewhat diverse in their conception; Wilbrahim Tollemache is conventionally represented in contemporary dress, whilst his mother Lady Grace Carteret, Countess of Dysart, is depicted in a classicising profile portrait that, with her elaborate coiffure with flying loose locks, somewhat recalls all’antica portrait reliefs of the sort that were popular in sixteenth-century Venice. The two most unusual images are however those of Lady Frances Carteret, later Marchioness of Tweeddale, and Sophia Fermor, Countess of Granville who, despite being their junior in age, was briefly the stepmother of Lady Frances and Lady Grace. These two women are presented in extremely austere neo-classicising depictions of a sort that is seen in some male eighteenth-century portraits. Good examples are Edmé Bouchardon’s 1729 portrait bust of Lord John Hervey, 2nd Baron Hervey of Ickworth (Ickworth; NT 852228), Louis-François Roubiliac’s bust of Philip Dormer Stanhope, 4th Earl of Chesterfield, made in 1745 as a pair for an antique bust of Cicero (National Portrait Gallery, London), or the marble bust of Dr Antonio Cocchi, made by Joseph Wilton in 1755 (Victoria & Albert Museum, London). In all these portraits the sitters are represented without wigs and as highly naturalistic if severe portraits. In ivory carving, Thomas Hollis (1720-74) commissioned from the Roman ivory carver Andrea Pozzi, to commemorate the sitter's birthday on 14 April 1752, a pair of portraits of himself and his companion Thomas Brand Hollis. Whilst the latter is depicted in profile wearing contemporary clothing, Hollis was depicted bare-chested and without his wig (Joan Coutu, Then and Now. Collecting and Classicism in Eighteenth-Century England, Montreal/London 2015, pp. 168-69, figs. 5.3and 5.4). There are also some parallels with the double portrait in the Victoria & Albert Museum of William Pitt and Elizabeth Windham, dated 1736 (Marjorie Trusted, Victoria and Albert Museum. Baroque and Later Ivories, London 2013, no. 149), although the portraits are less severe in the V&A relief. Although therefore a number of examples of severely neo-classical portraits of men from the middle decades of the eighteenth century are known, portraits of women in this mode are extremely rare. Unlike Thomas Hollis, John Carteret, Lord Granville, the father and husband of Lady Frances and Lady Sophia, was not a noted radical, which might otherwise have explained the treatment of the two women. It must be assumed that the group of ivory reliefs was intended as intensely private images within the contexts of the families of the sitters. Although the portraits may not all have been made at the same time, they can be dated to the second half of the 1740s. The portrait of Sophia Fermor is likely to date from 1744-45, since she only married Earl Granville in April 1744 and died just eighteen months later in October 1745, as a result of complications in childbirth. The very similar portrait of Lady Frances Carteret is likely to date from the same time. Some of the most original ivory portraits of British sitters at this time were made in Rome, but in the absence of any evidence that the four subjects travelled to Italy, it seems more likely that these ivories were carved in London, perhaps by an immigrant sculptor from Flanders or France. One possible candidate might be the Antwerp-born Gaspar van der Hagen (active 1744-1769), who worked for a time in Michael Rysbrack's workshop and made sculptures in both marble and ivory, specialising in small ivory heads. Jeremy Warren January 2022

Presumably the 4th Earl and Countess of Dysart; thence by descent, until acquired in 1948 by HM Government when Sir Lyonel, 4th Bt (1854 – 1952) and Sir Cecil Tollemache, 5th Bt (1886 – 1969) presented Ham House to the National Trust. Entrusted to the care of the Victoria & Albert Museum until 1990, when returned to the care of the National Trust, to which ownership was transferred in 2002.