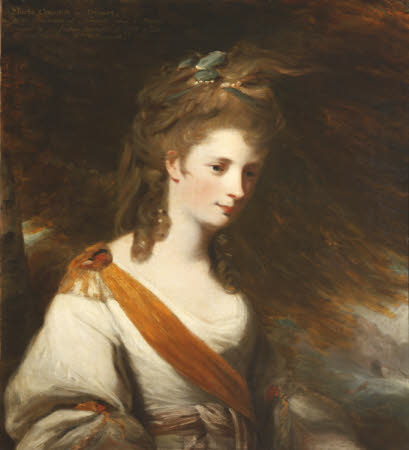 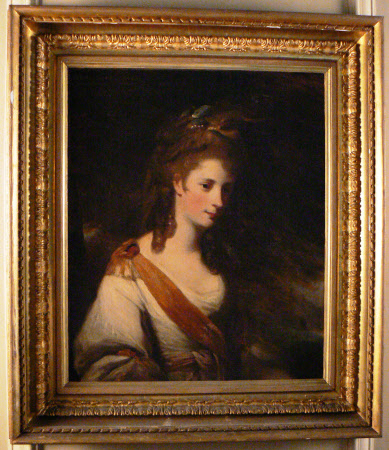 Oil painting on canvas, Anna Maria Lewis, Countess of Dysart (1745-1804) as Miranda (after Reynolds), inscribed top left in gold lettering: Maria Countefs of Dysart / in the Character of Miranda from a picture / painted by Sir Joshua Reynolds in 1775 when / she was the Hon. Mrs Tollemache, 1823. A half-length portrait of a young woman, turned slightly to the right, looking down, her hair dressed and piled upon her head with ringlets falling on her right shoulder, she wears a loose fitting gown, with a sash ribbon over her right shoulder. The original painting 'Mrs Tollemache as Miranda' by Sir Joshua Reynolds is part of the Iveagh Bequest, Kenwood. Anna Maria Lewis, Countess of Dysart (1745-1804) was the daughter of David Lewis of Allesley and Solihull, Warwickshire, married Wilbraham Tollemache, 6th Earl of Dysart (1739-1821). Her sister, Magdalena Lewis (d.1823), later married, as his second wife, Lionel Tollemache, 5th Earl of Dysart (1734-1799).