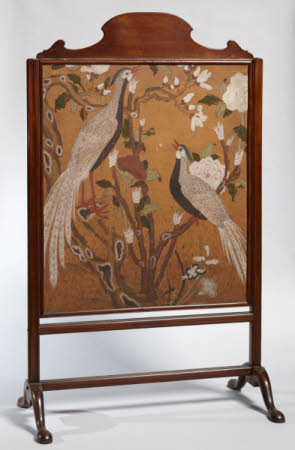 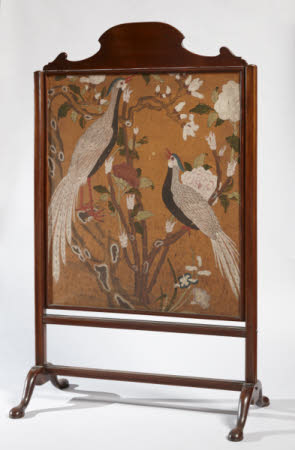 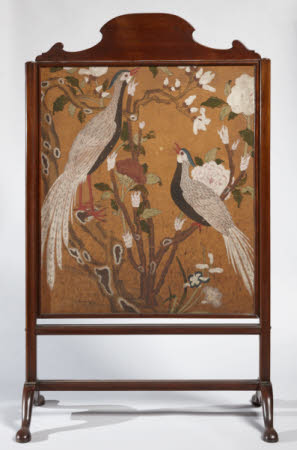 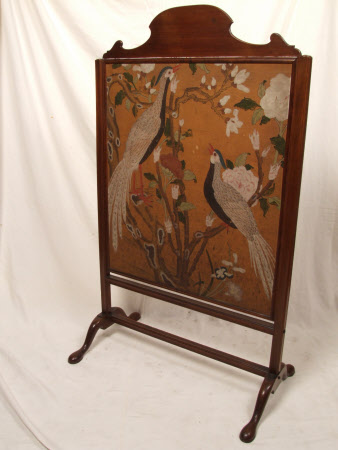 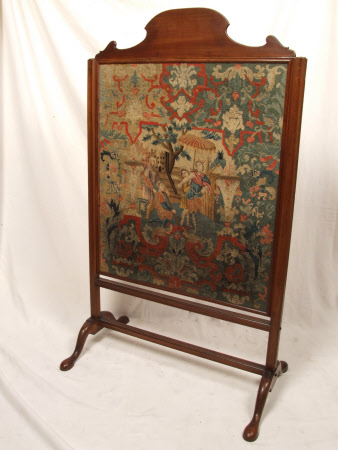 A fire screen in carved mahogany, probably by George Nix (active 1716-51). The screen is decorated on one side with a needlework panel showing figures in a landscape, and on the other with a coloured Chinese woodblock print depicting a pair of pheasants perched in a peony shrub. George Nix worked at Ham between 1729 and 1734, supplying furniture and carrying out repairs and alterations, and this fire screen could be the one supplied by him in 1732. A similar mahogany screen by George Nix (but with a later needlework panel) is at Hardwick Hall (NT 1127940). The Chinese print is similar in style to a set of 21 Chinese bird-and-flower prints pasted onto the walls of a study at Schloss Favorite, Baden Württemberg, probably in the late 1720s (see Emile de Bruijn, Chinese Wallpaper in Britain and Ireland, London, Philip Wilson Publishing, 2017, pp. 32 and 36).

Possibly the fire screen supplied by George Nix in 1732; in the Queen's Bedchamber at Ham, 1886, as shown in a watercolour by H.W. Brewer (private collection); acquired by HM Government from Sir Lyonel Tollemache, 4th Bt (1854–1952) and his son Cecil (later Sir Cecil Tollemache, 5th Bt, 1886–1969), 1948, together with the majority of the rest of the contents of Ham House, and entrusted to the care of the Victoria and Albert Museum; transferred to the National Trust, 2002.

Thornton and Tomlin 1980 Peter Thornton, and Maurice Tomlin. “The Furnishing and Decoration of Ham House.” Furniture History, The Journal of The Furniture History Society Vol.XVI, 1980, fig.181