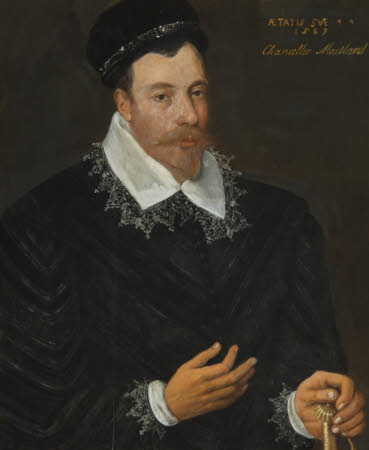 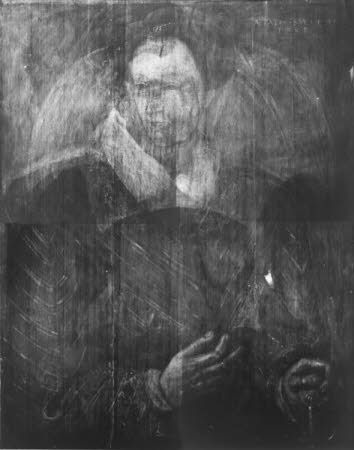 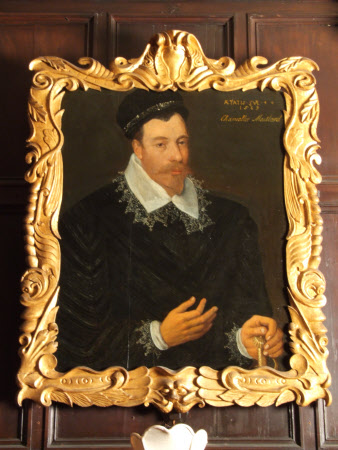 Oil painting on panel, Sir John Maitland, 1st Baron Maitland of Thirlestane (1543-1595), aged 44, Adrian Vanson (active 1581-1602), inscribed: Atatus SVE 44/ 1589/ Chancellor Maitland. A half-length portrait of the Lord Chancellor of Scotland under James VI by whom he was appointed to the post in 1586. He is turned slightly to the right, gazing to the right, wearing a fashionable diagonally-striped black doublet with white, pointed lace-edged collar and cuffs, and a black velvet cap or bonnet decorated with an embroidered gold braid band. He holds the end of his sword hilt with his left hand and his right hand to his chest. A presumably contemporary inscription states his age in Latin (44) surmounting the date (1589), while a later inscription gives his name below. Maitland was the younger brother of the better-known William Maitland of Lethington, Secretary to Mary, Queen of Scots. He was also grandfather of Elizabeth Murray's second husband, the Duke of Lauderdale; the portrait presumably came to Ham following their marriage in 1672 and was hung in the Long Gallery there, where it has remained ever since.

Maitland was the 1st Lord Maitland of Thirlestane, the son of Mariotta Cranstoun and the poet and Keeper of the Privy Seal of Scotland, Sir Richard Maitland of Lethington. He was educated at St Salvator’s College at St Andrews and in France. At 24 he became commendator of the priory of Coldingham in Berwickshire and, following his father’s resignation, Lord Privy Seal. During the Marian civil war he supported Mary, Queen of Scots, already captive in England, and he was with his brother in Edinburgh Castle during the ‘Lang Siege’. Maitland was imprisoned following the surrender of the queen’s men in 1573 and it was not until 1580 that he was fully rehabilitated at court. He was made a privy counsellor the following year, by 1584 he was created Secretary of State and in 1586 James VI appointed him Lord Chancellor. Resentment towards Maitland’s policies, including his strong ties to the Kirk, led a group of Catholic-dominated nobles, under the leadership of George Gordon, 6th Early of Huntly, to plot the murder of the chancellor in 1588. The failure of a coup the following year, in which the king was to be captured and persuaded to dismiss Maitland, may have been the impetus for the commissioning of this portrait, marking his survival and continued political status. This suggestion is arguably supported by Maitland’s pose: hand on his sword hilt, ready to fight, to defend his king, his beliefs and himself. The other event of 1589 worthy of a commemorative portrayal was Maitland’s voyage in the king’s company to Scandinavia to fetch James’s bride, Anne of Denmark. However, the king’s party left in October and did not return to Scotland until the spring of the next year, so this possibility seems unlikely. The production of another contemporary portrait of Maitland, a miniature by an unknown artist dated to c.1588, shows that either Maitland or one of his supporters, either familial or political, was interested in having his likeness recorded at this particular moment in his life (see for example, a miniature of c.1588 of John Maitland at the National Portrait Gallery). The Ham portrait of Maitland was painted when Maitland was the second most powerful man in Scotland, when only a small number of portrait painters were working in Scotland, and when portraiture was still a rare and luxurious commodity. The portrait would have been one of the ‘Twentie thrie pictures’ recorded in the ‘Matted Gallerie’ in the Duke of Lauderdale’s 1677 inventory, and one of the ‘Two & Twenty pictures with carv’d guilt frames’ in the same space, now called ‘The Gallery’, noted in his 1679 inventory.[1] It was mentioned by name in the c.1683 ‘Estimate of Pictures’ as ‘No 87 Chancellor Maitland £2.0.0’[2](and as ‘No. 85’ in the second version of the same list) in ‘The Gallory’[3]. The next recorded mention of the portrait, again by name and in the same location, is in Horace Walpole’s journal entry for 10 June 1770, when he saw at Ham ‘In the gallery, many Vandycks or after him & Lelys. Chancellor Maitland’.[4] Around 50 years after Walpole’s observations, in a catalogue of the pictures at Ham, the Maitland portrait is attributed, rather curiously, to the Dutch painter Cornelis Johnson, a presumption that remained in various inventories up until 1930.[5] Until technical analysis was carried out on the picture in 2017, attempts to attribute the authorship of the Ham portrait through analysis of painterly qualities or stylistic details was hindered by the fact that it was difficult to ascertain the original quality of the picture because much of the panel had been over-painted, with substantial reworking on the face and background, as well as in parts of the costume. Technical analysis carried out in 2017 by Dr Caroline Rae at the Courtauld Institute under the auspices of the Caroline Villiers Research Fellowship has confirmed the attribution of this picture to Adrian Vanson. Furthermore, X-radiography of the painting revealed an underlying portrait of a woman, possibly Mary, Queen of Scots (1542–1587), beneath the portrait of Maitland. The underlying portrait is most similar to those of the queen painted later in life, especially the group of (mostly) full-length portraits of the queen known as the Sheffield portrait type, so-called because an unknown prime version was thought to have been painted when she was held captive at either Sheffield Castle or Sheffield Manor. The composition recorded in the underlying portrait does not correspond directly with any extant painted or engraved portraits of the queen, suggesting that it is not a direct copy of an existing work, but the head does correspond closely to several of the known Sheffield type portraits (see for example NT 1129104 at Hardwick Hall, Derbyshire). Mary, Queen of Scots was executed in England in 1587 – two years before the inscribed date on the overlying portrait of Sir John Maitland. Mary’s recent execution may be a reason why her portrait was covered over or abandoned by the artist. Text adapted from: David Taylor, ‘Questions of Attribution’ in National Trust Historic & Collections Annual (Apollo) 2013, pp. 55-9. Caroline Rae, ‘Examination of Structure, Technique and Condition of Sir John Maitland, 1st Baron Thirlestane’, unpublished technical report, 2017. [1] From ‘Inventory of Goods In the Wardrobe belonging to his Grace ye Duke of Lauderdale at Ham and in John Marks his Custodie May the 19 1677 and A true Inventory of His Grace the Duke of Lauderdale’s Goods in Ham-House, taken the 4th of August 1679’. [2] ‘An Estimate of Pictures in Ham-house’, The Tollemache Papers, Buckminster Estate Office, MSS no. 361. [3] Ibid. [4] Horace Walpole, ‘Journals of Visits to Country Seats &c, xxxiv. Ham House near Richmond. June 10th 1770’, The Walpole Society, vol. XVI (1927-28), p.67. [5] Catalogue of Paintings, Drawings and Prints at Ham House, C.1820, British Library, Add MSS 28.217, p.3.