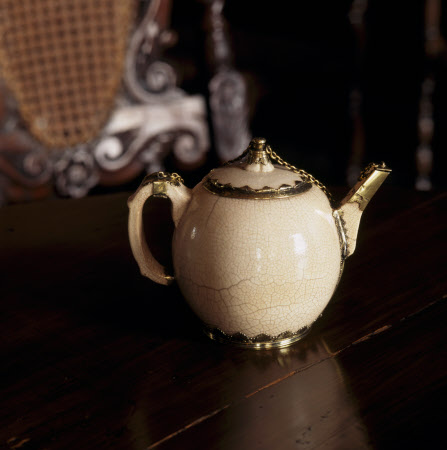 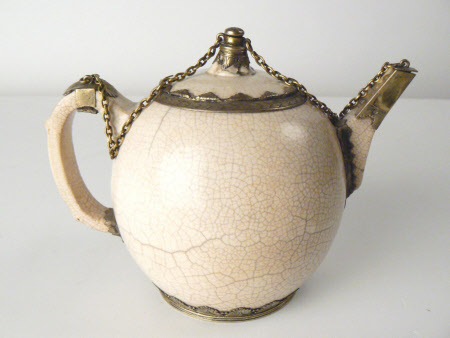 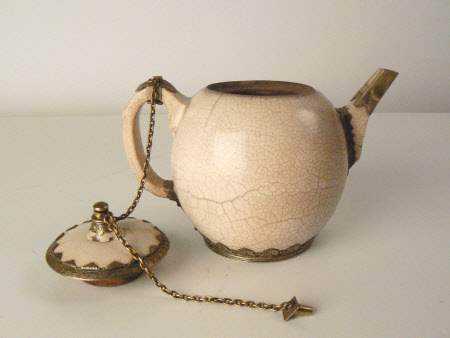 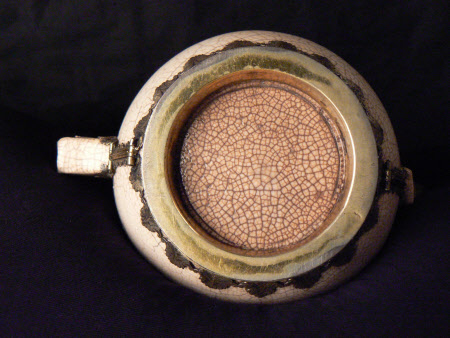 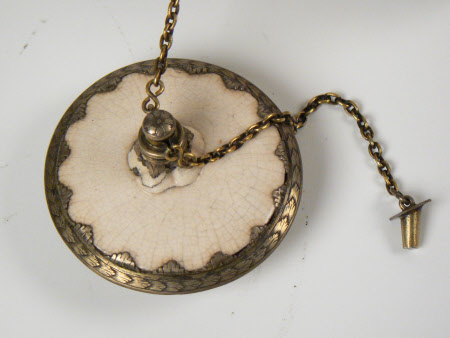 A 1679 inventory of Ham House, Surrey, lists in the White Closet, ‘One Indian furnace for tee garnish’d wt Silver’, a description which matches this Chinese ivory-coloured porcelain with gilt-silver mounts. This White Closet is next to the Private Closet, where the erudite Elizabeth Maitland, née Murray (1626–98, Duchess of Lauderdale and Countess of Dysart, kept her books and tea equipage; it was exotically furnished with a Tonquin (Vietnamese) or Javanese lacquer tea table (see NT 1140034) and and English 'Japan'd back stooles'. Such gold or gilt-metal mounted teapots, often of white porcelain, are mentioned in other inventories of the period: a 1669 inventory of Queen Henrietta Maria at château de Colombes, near Paris, lists ‘An Indian thea pot, garnish with gold’, and a 1688 inventory of Anne, Countess of Exeter, at Burghley House, Lincolnshire, includes ‘1 white teapot and cover, guilt spout and chaine to it.’ Devotees of the new beverage relied on first-hand accounts of China’s tea culture, as found in such books as ‘Divers voyage et missions du P. Alexandre de Rhodes en la Chine’, published in Paris in 1666 – a copy was at Ham until 1687. As well as describing the taste, cost and virtues of tea, it also explained how to prepare it. Water was boiled in a clean teapot, removed from the fire, tea leaves added, the cover secured and when the leaves sank to the bottom, it was ready to pour. A short-lived practice of building water in costly ceramic teapots over a coal-burning brazier or spirit-fuelled lamp is depicted in a book by Nicolas de Blegny, ‘Le Bon usage du thé, du caffé et du chocolat pour la preservation et pour la guérison des maladies’ (Paris, 1687). A brazier also appears in a Dutch tea-drinking scene of around 1670, painted by Roelof Koets II. Early treatises emphasise the need to trap evaporating steam by sealing all openings to hasten boiling, which explains why teapots were mounted with chained stoppers to plug the spouts. The ‘Indian furnace for tee’ at Ham may thus have described a ceramic teapot and its metal brazier. Alternatively, in his 1665 tea manual the Danish physician Simon Paulli illustrated a Chinese box-like contraption of copper with a divided interior, one for boiling water and another for infusing and dispensing tea, which was identified in the book’s 1746 English translation as a ‘furnace’. The Ham teapot, with its under-fired, heavily crackled glaze, was a product of the Zhangzhou kilns, in Fujian province. Zhangzhou was an important trading port in the illegal junk trade controlled by the Sheng family based in Taiwan, where the English East India Company had a factory or trading post between 1670 and 1683. On arrival in England, the previous teapot was elaborately mounted with a tight-fitting collar on the cover and a spout-plug attached to a chain. It was sold in the 1950s by Ham’s former owner Sir Lyonel Tollemache, 5th Baronet (1886–1969) to the antiques dealer Ronald A. Lee. In 1994, Lee presented it to the National Trust trough the Art Fund, in memory of his wife Betty. Text adapted from Patricia F. Ferguson, Ceramics: 400 Years of British Collecting in 100 Masterpieces, Philip Wilson Publishers, 2016. -