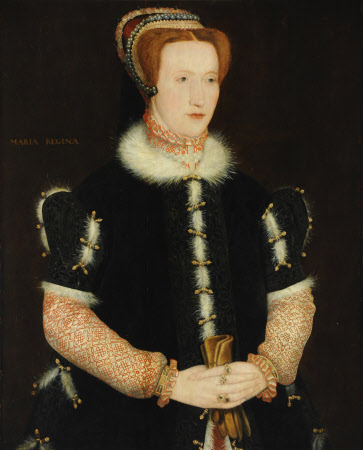 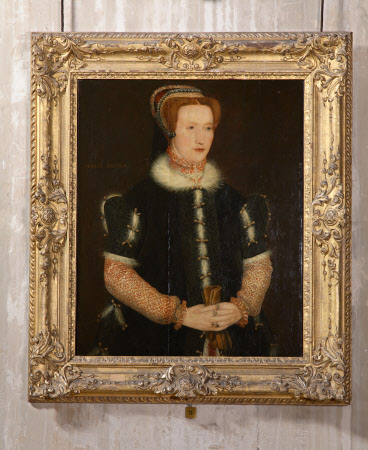 Elizabeth Talbot, Countess of Shrewsbury (?1527– 1608) – better known as Bess of Hardwick – was widowed four times and died one of the richest women in England. She served Queen Elizabeth I (1533–1603) as a gentlewoman of the chamber and proved loyal, remarkably resilient and energetic. She was not only active in promoting her family interests but also developed a passion as a patron of the arts. Her finest achievement remains perhaps one of the most beautiful houses in England: Hardwick Hall in Derbyshire, which still has multiple copies of her initials ‘ES’ standing proudly on the roof. Few other women of this time had such a legacy or claimed such influence. This portrait shows her when married to William St Loe (c.1520–65), Captain of the Queen’s Guard, who left her a considerable fortune on his death. She appears finely dressed in a fur-lined gown and gemstone rings. Characteristically, the portrait shows both her strength of character and high status because she appears facing towards the viewer’s right, a placing more traditionally reserved for men.

Oil painting on panel, Elizabeth Hardwick, later Talbot (‘Bess of Hardwick’), Countess of Shrewsbury (?1527-1608), follower of Hans Eworth (Antwerp c.1525 – ?London after 1578). Inscribed above shoulder, centre left (a later addition): MARIA REGINA. A three-quarter-length portrait, turned slightly to the right, wearing a black fur lined gown tied with aglets over a scarletwork chemise and a French hood decorated with pearls, her hands clasped in front with gloves; red hair. The sitter was previously identified as Margaret Douglas, Countess of Lennox and Queen Mary I.

This portrait depicts the great dynast Elizabeth Hardwick (‘Bess of Hardwick’), the second-richest woman in late Tudor England after Queen Elizabeth I. Bess is best remembered for making four increasingly advantageous marriages, as well as for the important matches she arranged for her family members. A notable patron of the arts, she is also celebrated for her building projects which included the great houses at Chatsworth, Hardwick Hall, and the now lost Oldcotes. Bess is depicted in her thirties around the time of her third marriage, to Sir William St Loe, Captain of the Queen’s Guard, after which she entered the queen’s service as one of her Ladies of the Privy Chamber. Painted in the style of Hans Eworth, probably by a Netherlandish émigré, she is shown expensively dressed in the court fashion of the early years of the reign of Elizabeth I. St Loe died in 1565, leaving Bess a considerable fortune. She was married for a fourth time, unhappily, to George Talbot, 6th Earl of Shrewsbury. The inscription ‘Maria Regina’ was added later when it was thought, incorrectly, that the sitter was Queen Mary I. The portrait has also been thought to represent Mary, Queen of Scots and Margaret Douglas, Countess of Lennox. However, the sitter’s physiognomy compares closely with other portraits known to be of Bess, and with the effigy on her tomb. It is probably one of the three portraits described as ‘My ladie’ that were listed in her 1601 inventory of goods at Hardwick Hall.

Listed in inventory of the contents of Hardwick Hall, 1601, and attached to the will of Elizabeth Hardwick,Countess of Shrewsbury (c.1520-1608); listed in Edward Swift, 1811, Picture Gallery as '3/4 of Queen Mary; and thence by descent until, following the death of Edward William Spencer Cavendish, 10th Duke of Devonshire (1895 - 1950), Hardwick Hall and its contents were accepted by HM Treasury in part payment of death duties and transferred to the National Trust, in 1959.