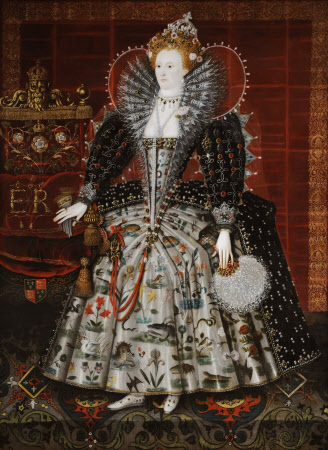 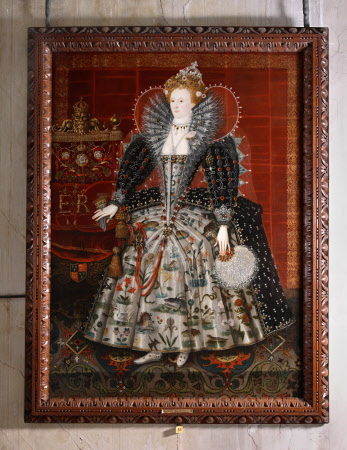 Painted by an English artist when Elizabeth I (1533–1603) was in her sixties, this image reflects the tradition of painting the queen as a timeless beauty. Although her ornate dress looks fantastical, with the underskirt decorated with flowers and land and sea creatures, there is no reason to think it does not record a similar dress owned by the queen. Elizabeth had one of the most extensive and lavish wardrobes of all time, and as late as 1599 she was described as ‘most gorgeously apparelled’. The outfit is also covered in hundreds of pearls, a symbol of purity suitable for a virgin queen. Elizabeth is shown standing full length on a raised platform with her throne to her right. The composition of this portrait may have been adapted from a miniature and was probably commissioned by Elizabeth Talbot, Countess of Shrewsbury. It may have been delivered to the countess’s home, Hardwick Hall, in 1599, and once installed, it would have provided a visual commentary on Elizabeth Talbot’s close relationship with the queen.

Oil painting on canvas, Elizabeth I (1533–1603), attributed to Nicholas Hilliard, c. 1598-9. A full-length portrait, wearing a dress decorated with land and sea creatures, standing, turned slightly to the left on a patterned carpet beside a crimson covered chair with the royal cypher embroidered on the cushion, wearing a crown, elaborate lace collar, white satin dress embroidered with flowers, birds and animals, over which is a black surcoat embroidered with pearl ornaments, holding a fan in her left hand and gloves in her right; the shaded area of the carpet at the bottom seems to denote a step.

This portrait presents Elizabeth I in an iconic format. The Queen appears to float weightlessly over the rich carpet, the painter’s attention firmly on the lustrous detail of the material surfaces. As in many other portraits of her, Elizabeth’s costume - including her headdress, gloves and shoes – is encrusted with pearls. Even late into her reign these symbols of purity and virginity remained a potent aspect of her public persona. The accounts for Hardwick mention payment of carriage for a portrait from London in 1599, which may record the acquisition of this work. This picture has previously been attributed to the studio of the painter Nicholas Hilliard (1547-1619), though it is less competently painted than the artist’s works in miniature. We know that Hilliard painted large-scale oil portraits however, and the so-called Phoenix and Pelican portraits of Elizabeth I (c.1575) are now associated with him. Alternatively, it is possible that Hilliard passed finished drawings and designs to another painter working in his style. Another suggestion for the authorship of this portrait was Rowland Lockey (c.1566-1616), Hilliard’s former apprentice. Lockey had already painted pictures for Bess of Hardwick in 1592, and he continued to work for her son from 1608 to 1613.

Possibly the painting recorded as being transported to Hardwick from London in July 1599 in Chatsworth Archive Hardwick accounts (MS 8 f. 56 v. 19 July 1599); in inventory of the contents of Hardwick Hall made in 1601 and attached to the will of Elizabeth Hardwick, Countess of Shrewsbury (c.1520–1608); recorded by Horace Walpole (1717 - 1797) in 1760 as in the 'Gallerie'; by descent until, following the death of the 10th Duke of Devonshire (1895 - 1950), Hardwick Hall and its contents were accepted by HM Treasury in part payment of death duties and transferred to the National Trust, in 1959