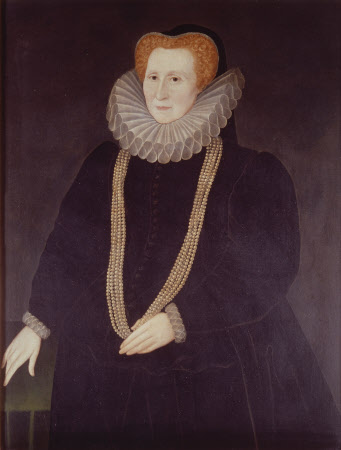 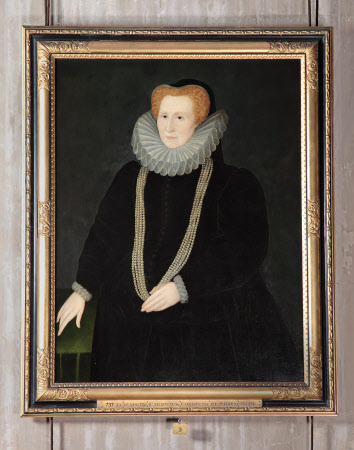 This portrait of Elizabeth, Countess of Shrewsbury, popularly known as Bess of Hardwick, shows her after the death of her fourth and last husband, the 6th Earl of Shrewsbury, in 1590. She was a resolute and ambitious woman, a collector and a builder on an almost unprecedented scale, and possessed wealth affording her every indulgence. Her supreme monument is the house that she built at Hardwick, perhaps the least altered and most atmospheric of all Elizabethan ‘prodigy houses’. This portrait is displayed at Hardwick against the background of the famous series of Flemish tapestries that Bess had acquired from Sir Christopher Hatton. It was probably painted by Rowland Lockey, an apprentice of Nicholas Hilliard. He is recorded as having worked as a miniaturist for Bess in 1592, and from 1608 he was patronized by William, Lord Cavendish (later Earl of Devonshire) for whom he appears to have painted many copies of earlier pictures.

Oil painting on canvas, Elizabeth Hardwick (‘Bess of Hardwick’), Countess of Shrewsbury (1520-1608), probably by Rowland Lockey (c.1565 – London 1616), after 1590. A three-quarter-length portrait, in mourning velvet dress, turned slightly to the left, her right hand resting on table, wearing black cap and gown, ruff, lace at cuffs, set off by the splendid five-strand rope of pearls which Bess herself described in a hand-written inventory of her jewels as : 'FORE ROPES OF GREATE PERLS. A replica is in the National Portrait Gallery.

In Inventory of the contents of Hardwick Hall made in 1601 and attached to the will of Elizabeth Hardwick, Countess of Shrewsbury (c.1520-1608); and thence by descent until, following the death of the 10th Duke of Devonshire (1895 - 1950), Hardwick Hall and its contents were accepted by HM Treasury in part payment of death duties and transferred to the National Trust, in 1959

Recto: Label in black on gilt tape: [original number concealed by CC no. 737] ELIZABETH HARDWICK COUNTESS OF SHREWSBURY [backboarded, so impossible to see back]