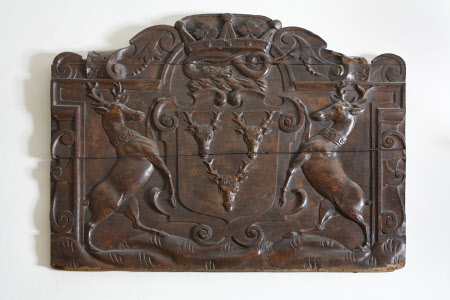 A carved elm or oak armorial achievement, 17th century, similar to NT 1128072, of arched form centred by an Earl's coronet above the Cavendish crest, 'a serpent nowed proper', the arms 'three stags' heads cabossed', and supporters 'a buck wreather about the neck with a chaplet or roses', beneath an arch of Vitruvian scrolls and pilasters with Ionic capitals and volute terminals. This coat of arms is for the Earls of Devonshire and thus pre-dates 1694, when William Cavendish, 4th Earl, was created Duke of Devonshire. The title of Earl of Devonshire was first created in 1618.