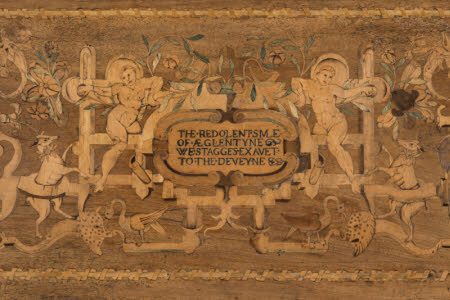 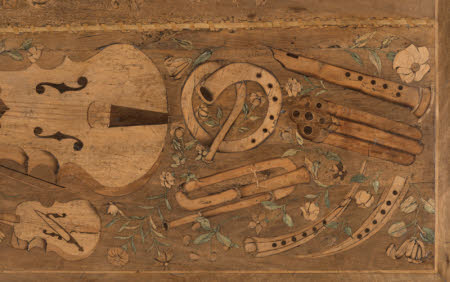 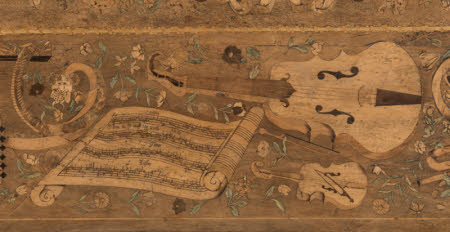 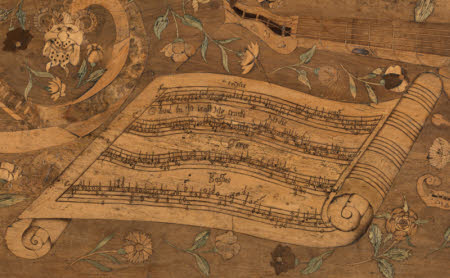 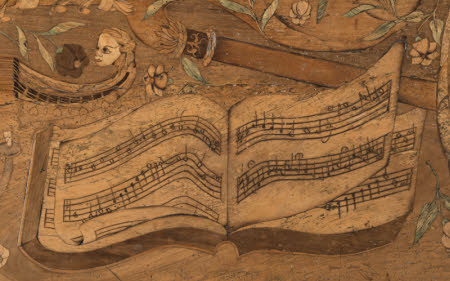 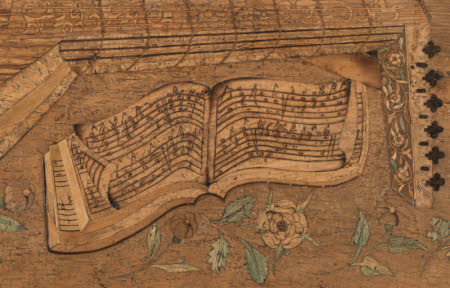 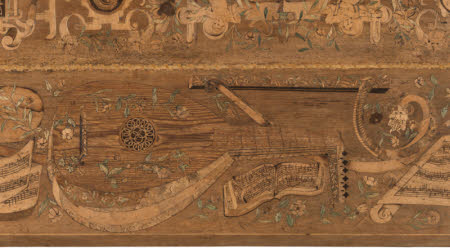 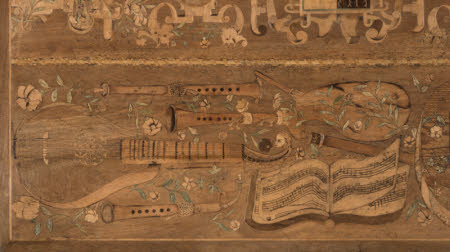 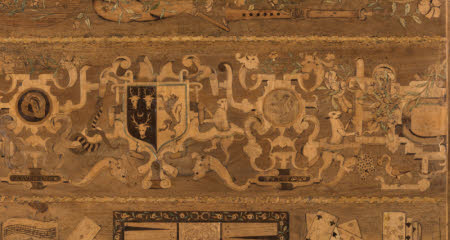 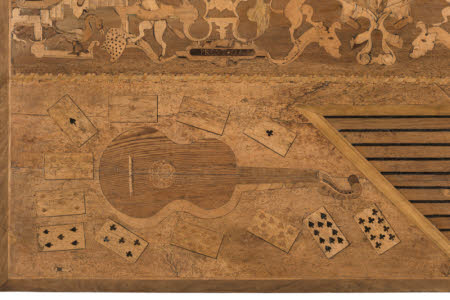 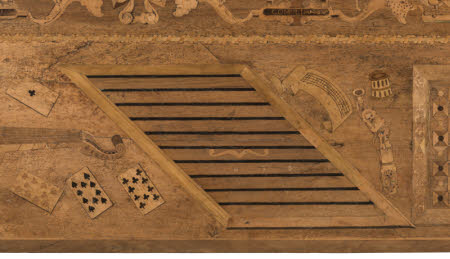 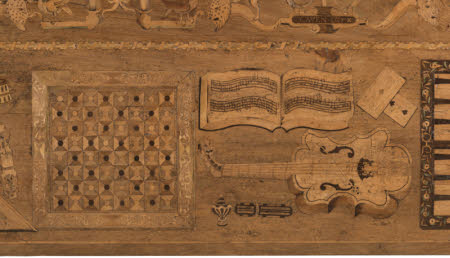 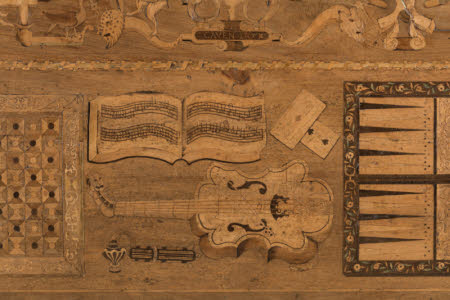 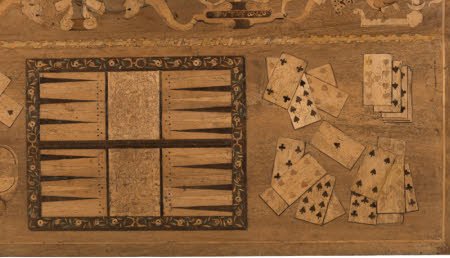 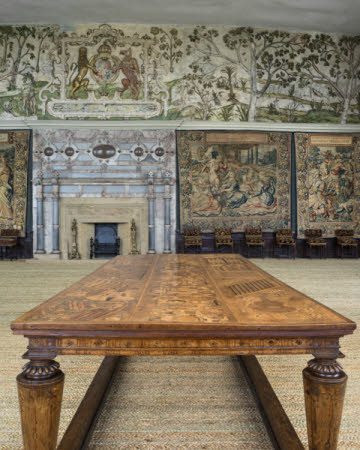 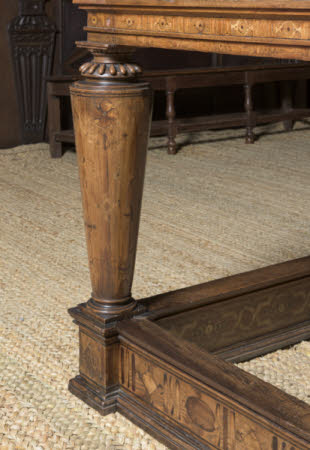 The top walnut, limewood and fruitwood veneers on a deal core, inlaid with various woods, the base of ash with painted decoration to the stretchers

This table is one of the rarest surviving pieces of furniture in England, and has been a draw for those visiting Hardwick for centuries. It takes its name from the motto inlaid to the centre of its top, which refers to 'aeglentyne' or 'eglantine', the old word for a sweet briar rose. The rose was part of the Hardwick arms adopted by Bess of Hardwick; later the rose-collared stag would be adopted by the Cavendishes.

The so-called 'Aeglentyne' Table, probably London, circa 1568, the walnut, fruitwood and limewood top inlaid with various timbers in three bands of elaborate marquetry depicting musical instruments, musical scores, playing cards, gaming boards and strapwork containing armorials, symbols and mottoes of Cavendish, Hardwick and Talbot, all around a central cartouche inlaid with the motto 'THE * REDOLENT * SMLE * / * OF * AEGLENTYNE / WE * STAGGES * EXAVET * / TO * THE * DEVEYNE', the base of ash, and with tapering columnar form legs with depressed gadrooned capitals, and inlaid with alternate flowers and rings, the deep base rails applied with upper and lower mouldings inlaid with strapwork to the exterior and with conforming painted strapwork to their inner faces.

This table is one of the rarest surviving pieces of furniture in England, and has been a draw for those visiting Hardwick for centuries. It takes its name from the motto inlaid to the centre of its top, which refers to 'aeglentyne' or 'eglantine', the old word for a sweet briar rose. The rose was part of the Hardwick arms (Bess adopted it in favour of the cinquefoil used by other members of her family); later the rose-collared stag would be adopted by the Cavendishes. The table's heraldic and dynastic references strongly suggest that it was made to commemorate marriages made between the Cavendishes and Talbots in 1567 - 1568. In 1567, Bess of Hardwick (c. 1527 - 1608) married her fourth husband, George Talbot, 6th Earl of Shrewsbury (c. 1528 - 1590), whilst Bess' eldest son, Henry Cavendish, married Lady Grace Talbot, the Earl's youngest daughter, on 9th February 1568. On the same day, Bess' second daughter, Mary Cavendish, married Gilbert Talbot, the Earl's second son and later 7th Earl of Shrewsbury, but arms commemorating this match do not appear to the table-top. Anthony Wells-Cole has shown that Jacob Floris's 'Compertimentorum quod vocant multiplex genus', published in Antwerp between 1566 and 1567, was the design inspiration behind the table's strapwork frieze, and this table does bear comparison to Flemish and German work of the 16th century, but the execution of the inlay, and motifs such as the floral slips, which feel English in design, suggest that this table may well have been made by craftsmen in London, possibly in Southwark. The thirteen musical instruments depicted include a four-course guitar, several viols and bows, a cittern, two shawms, bagpipes, a lute, a harp, a horn, a recorder, a sackbut and two cornetti. One of the depicted music books bears a four-part setting of 'O Lord in Thee is all my trust' by Thomas Tallis, which was first printed in London in 1563. It has been noted that the upper and lower boards which form the top are inlaid in a different manner. The lower frieze of gaming paraphernalia, two musical instruments, playing cards and a penner, being more 'staccato' and without the sixty-five various floral sprays which adorn the upper frieze of musical instruments and scores. The central board is of walnut; the upper and lower friezes are made up of fruitwood and limewood planks of various sizes. It is possible, therefore, to speculate that the central board may have been conceived as an independent panel, perhaps intended as part of wall paneling, and the two outer boards were an afterthought when the idea of the table was conceived. The 'Aeglentyne' Table's closest counterpart - the 'Burrell' table which is dated 1569 - also survives in a British collection, and the existence of both tables bearing English heraldic references reinforces the case that both were of London manufacture. The table cannot be identified with any certainty in the 1601 inventory. Margaret Jourdain suggested in 1924 that it may have been the 'inlayed table in the windowe' in the High Great Chamber, but there are several other tables at Hardwick which are candidates, such as 'an inlayde table' in the 'high gallerie'. It has recently been suggested that it bears a greater resemblance to the description of 'an inlayde table' with 'a flannel to cover it' in the 'highe gallerie' at Chatsworth, a room lined with inlaid and coloured paneling.

To table top: THE * REDOLENT * SMELE * OF * AEGLENTYNE WE * STAGGES * EXAVET * TO * THE * DEVEYNE To table top: Arms and armorials including Talbot impaling Hardwick, Cavendish impaling Talbot, and other crests and devices.