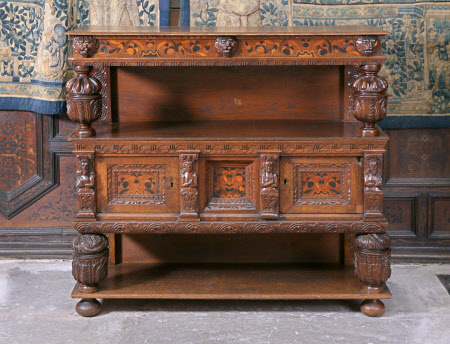 An oak and inlaid standing livery cupboard, or court cupboard, English, circa 1600 - 1610, but with modifications, the frieze inlaid with contra-partie flowers and applied with three carved lion masks, raised on a pair of gadrooned and leaf-carved bulbous columns flanking an open shelf, above a cupboard enclosed by a pair of inlaid paneled doors, flanking a conforming fixed panel. The front applied with four figural terms above a foliate lozenge-carved rail and further leaf-carved columns, flanking an open shelf. -- Much of the 16th and 17th century oak at Hardwick Hall, the indigenous pieces aside, was probably purchased by the 6th Duke in the 19th century to enhance the Elizabethan feel of the property, much as his contemporary, Charles Winn of Nostell Priory, is known to have done (Westgarth, Raikes). The 6th Duke is recorded, for instance, as having bought 'oak Arm chairs' in 1846.