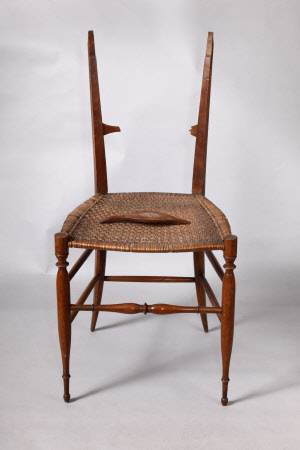 A chair, one of a set of six cherry chiavari, or rout, chairs, Italian, early to mid-19th century, by Giuseppe Gaetano Descalzi (1767-1855) of Chiavari, Genoa. Having a broad curving toprail, horizontal splat with central swelling and woven cane seat, on turned and tapering legs united by turned peripheral stretchers.

This lightweight and easily portable chair was first made by Giuseppe Gaetano Descalzi (1767-1855) of Chiavari, Genoa, and is sometimes called the ‘campanino’ model. A 1986 exhibition dedicated to the chiavari included two very similar chairs. One (Cat. No. 4, pp. 31-3), the identical model, is attributed to Guiseppe Geatano Descalzi and dated circa 1820. It is made of varnished cherry. Another slightly less refined chair, also of cherry but with an ebonised finish, and with minor differences in design, is firmly given to Descalzi and dated to 1841 (Cat, No. 7, pp. 33-4). This design, and others produced by Descalzi (particularly the model with slender turned spindles to the back), were extremely popular, and graced some of the finest residences in Europe. Indeed, this type of chair is depicted in several watercolours by Jean-Baptiste-Fortuné de Fournier (1798-1864) of rooms in the château of Saint-Cloud, one of the palaces used by Napoleon III (1808-1873) and his wife, the Empress Eugenié (1826-1920). Known in Italy as chiavari, and in France as charivari, in England they are called ‘rout’ chairs, a reflection of their use as chairs brought out specifically for use at entertainments and balls, otherwise called routs. They are still used in the same way, particularly at weddings.