The Big Three - Winston Churchill, Franklin D. Roosevelt and Joseph Stalin at the Yalta Conference, February 1945 (from an Illustration in Trud) 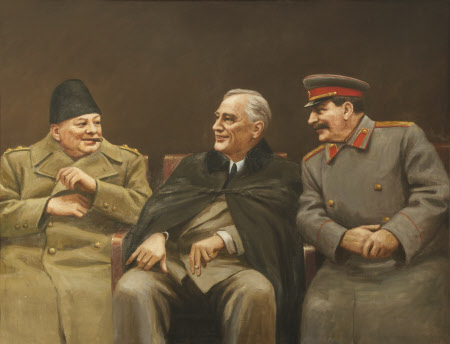 Oil painting on canvas, The Big Three - Winston Churchill, Franklin D. Roosevelt and Joseph Stalin at the Yalta Conference, February 1945 by an unkown Russian artist (T. Lelkov), 1945. Group portrait of all three seated, Churchill and Stalin wearing hats and army greatcoats. The Big Three first came together on 1st December 1943 in Tehran, Iran (Eureka) when they made a joint statemet: "We expressed our determination that our nations shall work together in war and in the peace that will follow. [...] We came here with hope and determination. We leave here, friends in fact, in spirit and in purpose." Further conferences between the so-called "grand alliance" took place in Yalta and Potsdam (when Truman replaced the late Roosevelt; Clement Attlee replaced Churchill as Prime Minister) in 1945 to co-ordinate progress of the war and its aftermath. This painting shows them sitting at Yalta, on the Black Sea, USSR conference which took place between February 4-11, 1945, and Churchill is wearing a Caucasian black fur hat.