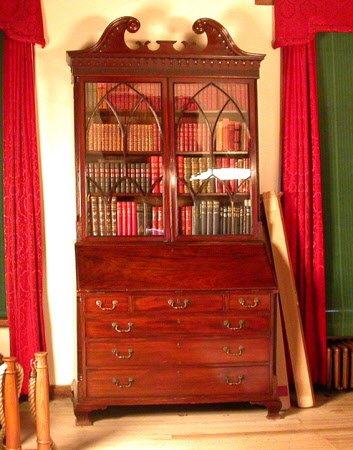 A mahogany bureau-bookcase, English, mid-18th century, the moulded swan-neck pediment with reeding and terminating in roundels, a central element, thought to have been a carved eagle, absent, above moulded and fluted frieze bands, a pair of gothic astragal glazed doors enclosing three adjustable shelves flanked by fluted and reeded quarter columns with turned ends terminating in block bases with low relief carving, the bureau fall enclosing two set of four pigeon holes, each set with a long shallow drawer above and two over one below, these two sets flanking a small cupboard door between two secret drawers, the secret drawers front appearing as two pairs of flat fronted fluted Corinthian columns with gilt-brass capitals, the fall above three short over two long cockebeaded drawers, with decorative brass swan-neck handles (later) and replaced Chubb Patent locks (bureau bookcase with Chubb locks numbered 1018814-1018820), the drawers flanked by quarter columns matching those in the upper section, on ogee bracket feet.

Chartwell was purchased by Winston Churchill in 1922 and for the next 40 years it was the family home. Presented to the National Trust in 1946, Winston and Clementine Churchill continued to live there until 1965 when it was relinquished to the management of the National Trust. Much of the contents of Chartwell were accepted by the Treasury in payment of death duty and retained in the house. Lady Churchill also gifted many pieces and others are on loan from the Churchill family. The bureau-bookcase is thought to have belonged to Sir Winston's father Lord Randolph Churchill. A pencil sketch found in the study at Chartwell appears to show Lord Randolph seated in front of this bureau-bookcase.