Design of the ceiling of the Dining Room 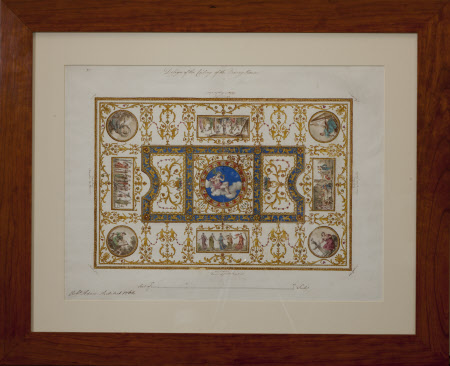 Ink with colour wash and bodycolour on paper

Design of the ceiling for the Dining Room. With painted scenes (identified) in roundels and rectangular panels (attributed to the Italian artist Agostino Brunias). Scale in feet. In ink above drawing: "Design of the Ceiling of the Dining Room". Numbered "21". Signed and dated: "Robt Adam Architect 1762". Formerly in "Sections of Rooms at Kedleston" [CMS inv. no. 109428], p. [39]

Created by Robert Adam for Nathaniel Curzon, 1st Baron Scarsdale. By descent to Francis Curzon, 3rd Viscount Scarsdale. Acquired by gift as part of the transfer of Kedleston Hall to the National Trust in 1987.

Recto above drawing: "Design of the Ceiling of the Dining Room" Recto lower left corner: Signed and dated: "Robt Adam Architect 1762" Recto, along side the edges of the drawing: Identification of the painted scenes in roundels and rectangular panels Recto upper left corner: Numbered "21"