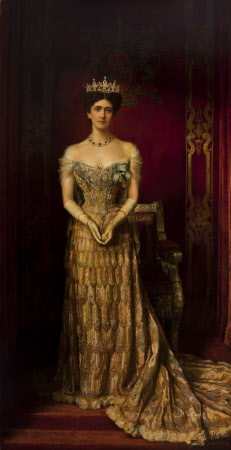 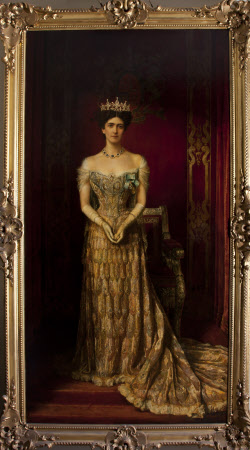 Oil painting on canvas, Mary Curzon (1870-1906) by William Logsdail (Lincoln 1859 – Noke, Oxfordshire 1944), signed and dated William Logsdail, 1909. A posthumous full-length portrait of Mary Victoria Curzon, Baroness Curzon of Kedleston, Vicereine of India (1899-1905), wearing the 'Peacock Dress' (NT 107881), the Boucheron diamond tiara and a jewelled, possibly diamond and sapphire, necklace. The Peacock Dress was worn by Lady Curzon at the 1903 Delhi Durbar Coronation Ball marking the succession of Edward VII and Queen Alexandra to Emperor and Empress of India. The portrait was painted by Logsdail three years after Lady Curzon's death and is based on the official photograph taken of the Vicereine at the Delhi Durbar. Paired with NT 108823, the Logsdail portrait of George Nathaniel Curzon, 1st Marquess Curzon of Kedleston (1859-1925), as Viceroy of India.