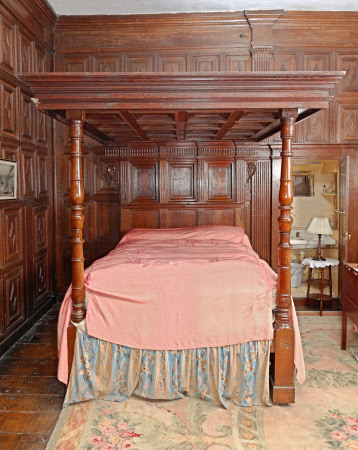 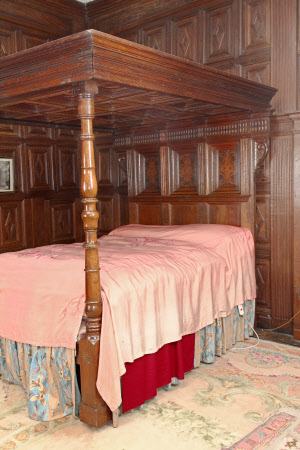 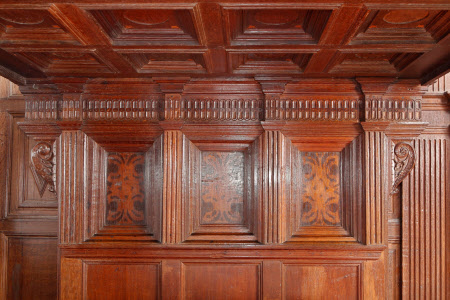 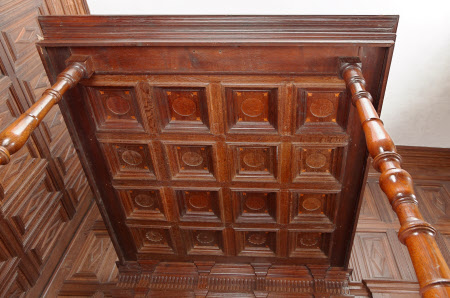 An oak and inlaid tester bed, English, 16th century and later, with parts - particularly its inlay - lacking. The tester with moulded cornice and with sixteen heavily moulded panels, all with a sunken circular reserve, probably once inlaid. The four panels nearest the footboard with petalled circular reserves. All sixteen panels inlaid to the corners with a small flowerhead. The headboard with four projecting pilasters forming three bays. The upper frieze with two rows of opposing nulling above three panels, all with lighter patches where an arabesque design was once applied, and all between a pair of carved foliate scrolls. Three plain panels below. The probably later footposts with multiple baluster and ring turnings, and square plinths.

This bed - which appears to have been altered - is reminiscent of the paneling to the Inlaid Chamber, and the bed which stands in that room [NT 997761]. Only the scrolls which form ears to the headboard link it to the woodwork and furniture made for Sizergh in the 1560s, and so it's 16th century parts probably date from the 1570s or 1580s, when the inlaid paneling and bed are thought to have been made. However, there are some turned beds mentioned in the inventory of 1569, taken when Walter Strickland died. Thus, 'a throwen [turned] bed of woodd' is listed 'In the lords chamber'; another is in 'the chamber where Thomas Proctar lyes'; a third 'in the inarmer chamber in ye hye towar'; a fourth 'in the next chamber to yt in the hye towar'; another in 'the outer house in the midle tower' and a sixth in 'the chamber where Mr Tempest lyes'. (Megan Wheeler, 2016)