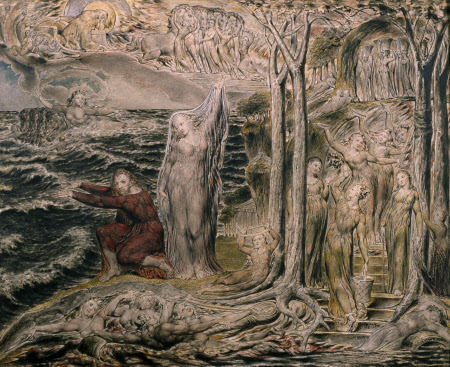 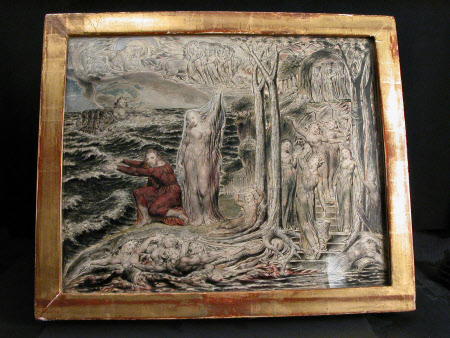 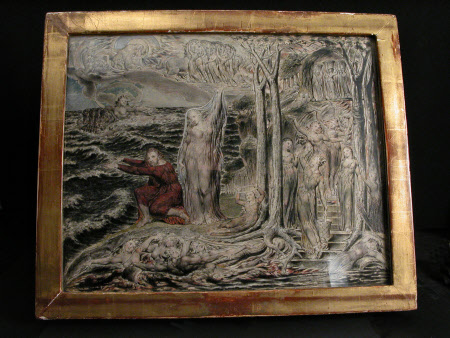 This stormy scene, complete with nymphs and Naiads, a horse-drawn chariot and classical temple might depict Ithaca - the legendary home of Odysseus. This picture may have been purchased by John Chichester of Arlington directly from William Blake. At some point it was lost but was later rediscovered in a pile of 'junk … in a dusty heap on top of a wardrobe in the housemaid’s pantry' after Arlington had been left to the National Trust by Miss Rosalie Chichester in 1949.

Pen and black ink, watercolour and gouache on gesso ground on stiff paper, The Sea of Time and Space (Vision of the Circle of the Life of Man) by William Blake (London 1757 - London 1827), signed and dated, bottom left: W. Blake/ Inventor, 1821. This mainly monochrome imaginary scene with a multiple number of figures also uses a mixture of scale and perspective. It takes place besides a stormy sea, on the left. A grassy cliff face drops below behind the main figures, in the centre, to a classical temple. On the right a stone staircase extends upwards through a grove of trees. A male figure, dressed in red, is sitting, and almost kneeling, on a rock on top of the cliff beside the seashore. His hands are extended towards the waves to the left whilst he looks outwards with his head turned toward the viewer. A female figure, veiled from head to toe, is standing beside him in the centre with her left arm raised. To her left, in amongst the trees are seven females in long classical brown dresses spinning thread between them. Below in the foreground and in the water are four more figures with the yarn and spindle. On the right is a sleeping figure draped across an urn. On the upper right is another group of female figures holding water vessels on their heads. To their right extending across the sky to the left is another staircase emerging from the cloudy heavens with a figure in his horse-drawn chariot also attended by females. Below the chariot, and in the sea, in the left background, is a female, possibly a sea-nymph or Nereid, riding on her hippocampi (horses of the sea).

The title is a quotation from Blake's Prophetic Book Vala or the Four Zoas. The man has been variously described as Christ, Blake himself, Isaiah, or Odysseus. The female has been described as Blake's goddess of nature, Vala, or Athena or even Calypso. It seems as if the scene is of Ithaca, complete with a Greek temple, grove, nymphs and Naiads, described in Homer's Odyssey, Book XIII. On the right are the three Fates, Clotho, Lachesis and Atropos, who spin, measure, and cut the thread of life and determine the destiny of man. They are usually portrayed as old cronies but Blake's are young beautiful women with extra attendants. Apollo (representing Fire) sleeps beside his carriage with attendants on a cloud in the sky. It is likely that the female figure cleaving through the water on four horses is Venus (representing Water) with a cloud framing her in a similar fashion to her usual garland. It appears to be an expression of a rejection of the nature-bound religion of the classical world and is absent of Blake's usual Christian symbolism.

Possibly bought by Colonel John Chichester of Arlington direct from the artist. At some later stage the drawing was lost. It was rediscovered in 1949 in a pile of “junk … in a dusty heap on top of a wardrobe in the housemaid’s pantry”, after Arlington had been left to the National Trust by Miss Rosalie Chichester (see James Lees-Milne, Midway on the Waves, 1985) in 1949. Whitehead relying on an account given to him fifty-six years later by Herbert Newman, a former retainer of Rosalie Chichester and later an employee of the National Trust, concluded that it might instead have been found in a bedroom in the – subsequently demolished – new north wing added by her father, which she had turned into her ‘Photographic Room’. Whitehead adopts, as a possible alternative provenance, J. E. M. Latham’s suggestion that the picture was purchased or commissioned by Sophia Catherine Ford, who married Colonel John Chichester, as his third wife, in 1822, or by her mother, Mary, Lady Ford, widow of Sir Francis Ford. John Linnell recorded in his diary entry for 8 May 1820 that he and Blake went to call on Lady Mary at her London house to see ‘her Pictures’; bequeathed to the National Trust with Arlington Court by Miss Rosalie Chichester (1865 – 1949)