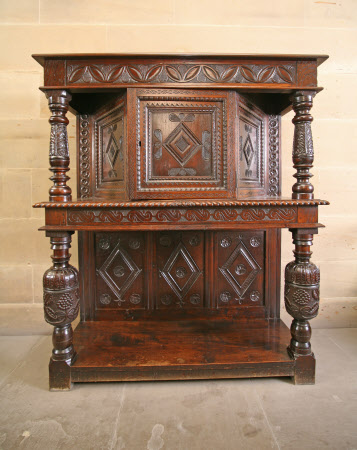 circa 1830 (constructed, but using earlier timbers)

An oak court cupboard, English, probably constructed in the 19th century using timbers of the 17th century. The upper section with leaf-carved frieze raised on a pair of leaf-carved baluster- and ring-turned supports flanking a canted cupboard enclosed by a lozenge-carved door and conforming panels. The lower section with an 'S' scroll-carved frieze raised on a pair of bulbous baluster-turned and flower and leaf-carved columns. With potboard before a back of three lozenge-carved panels.

Once thought to have come from the 17th century house at Nostell, surviving bills and receipts suggest that much of the oak furniture at Nostell Priory was in fact purchased by Charles Winn (1795 - 1874), who inherited a house with many rooms unfinished. An interested antiquarian, Winn chose to furnish some of the rooms, such as the Lower Hall, Vestibule and West Passage, with furniture of the 16th and 17th centuries. Payments were made by Winn to E. Terry of Thornes, near Wakefield, for 'sundry pieces of antique oak furniture' in 1834 and to John Swaby, a curiosity dealer of Wardour Street, London, for 'several pieces of old carved wood' in May 1821, some of which were probably used by Winn to reconstruct parts of the interior of Wragby Church. Swaby made frequent buying trips to the Continent, and may well have supplied Winn with pieces like NT 959707, a Continental armoire, and the French cabinet in the manner of du Cerceau's designs (NT 959805). Some pieces, such as NT 959709 (a chair), NT 959708 and NT 959826 (both settles), amongst others, were obviously fabricated in the 19th century, although all such pieces at Nostell do incorporate timber from genuine pieces of early furniture. Much of the oak furniture at Nostell is typically Yorkshire in style.