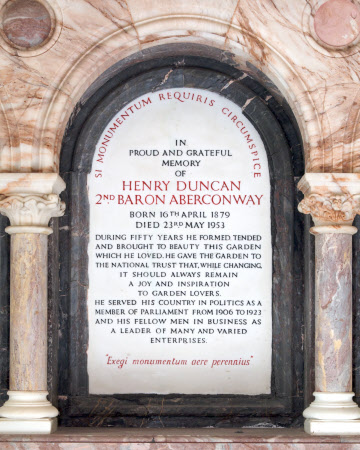 Front: Si monumentum requiris circumspice In proud and grateful memory of Henry Duncan 2nd Baron Aberconway Born 16th April 1879 Died 23rd May 1953 During fifty years he formed, tended and brought to beauty this garden which he loved. He gave the garden to The National Trust that, while changing, it should always remain a joy and inspiration to garden lovers. He served his country in politics as a Member of Parliament from 1906 to 1923 and his fellow men in business as a leader of many and varied enterprises. "Exegi monumentum aere perennius"