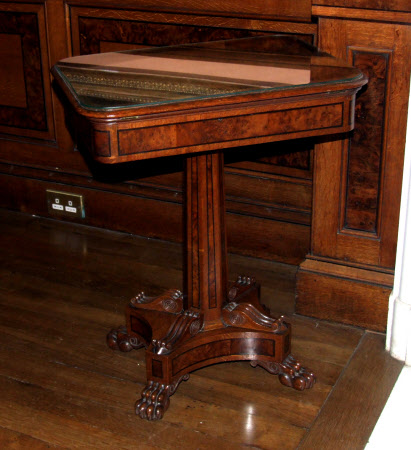 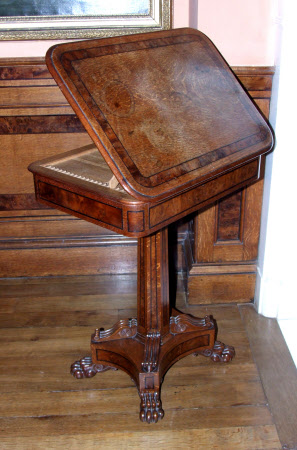 A yew-banded oak and walnut pedestal library table, English, probably supplied by George Morant (fl. c. 1790 - 1839) (also G. J. Morant and later Morant & Co), of New Bond Street, circa 1813, shortly after the library at Melford Hall, designed by Thomas Hopper (1776 - 1856), was completed that year. The rectangular top with rounded corners and lifting to form an adjustable sloping reading surface. The friezes banded in yew within stained walnut lines, and with a drawer to one short end. Raised on an hexagonal pedestal and a similarly-decorated concave base with reeded and boss-carved scrolling trusses, and four scroll and paw-carved feet. The drawer oak lined.

Part of a suite of furniture believed to relate to payments of £700 made by Sir William Parker, 7th Baronet (1769 - 1830) to George Morant of 88 New Bond Street, cabinet-makers and upholsterers to William IV, between 1812 and 1815. In the same period, Gillows of Lancaster received payments of just over £100, possibly for the Grecian chaises longue, or couches, with winged feet [NT 926537.1 & .2]. Having succeeded the 6th Baronet in 1812, Sir William began altering this wing of Melford, filling in the recesses between the turrets of the West Front in order to provide an extra suite of bedrooms upstairs, and a Library and study for his own use downstairs. The rainwater heads to the exterior of this part of the Hall bear the date 1813. Sir William employed Thomas Hopper (1776 - 1856), most famous now for Penrhyn Castle, Carlton House for the Prince Regent and Erddig. He also made alterations to Kentwell Hall, less than half a mile from Melford Hall. The furniture was carefully designed to complement the bookcases [NT 926600] and the matching dado, which are of oak, yew-wood and dark-stained walnut. A similar reading table [NT 926535] also with a hinged top, a firescreen [NT 926597], and a library table [NT 926534] form part of this set. (Megan Wheeler, 2017)

Probably acquired circa 1814 by Sir William Parker, 7th Baronet (1769 - 1830). Thence, part of the Hyde Parker Collection, and by descent to Sir Richard Hyde Parker, 12th Baronet (b. 1937). Melford Hall and part of the collection were Accepted in Lieu and transferred by the Treasury to the National Trust in 1960.