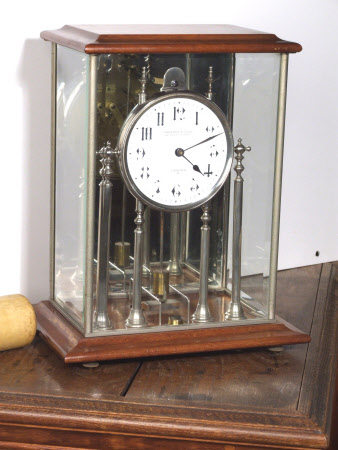 This clock demonstrates Julius Drewe’s enthusiasm for the latest gadget. In the early 20th century, mechanical clocks that were powered manually by a hanging weight or a mainspring dominated the market; yet Drewe liked to keep up with the latest trends and bought the clock at a cost of 5 guineas. The clock still works today, and joins a variety of gadgetry throughout the house such as a centralised vacuum cleaning system built under the floorboards of the rooms and an electric undercloth on the Dining Room table into which artificial candles were inserted to light the setting. Unfortunately, the centralised vacuuming system failed to work, and one can only imagine the danger of spilt drinks on an electric tablecloth!

This item forms part of the original Drewe family collection at Castle Drogo. It was transferred to the National Trust in 1986.