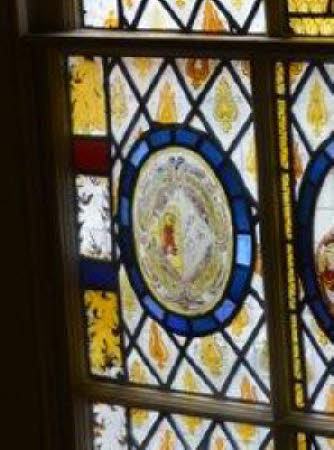 One of 13 stained glass panels in a window. Timber-framed window, probably late 19th or early 20th century, with stained glass set into the thirteen separate sections of the frame. The background of all panels has diamond quarry glazing with stylised floral motifs in glass paint and silver stain. The borders have leaf motifs, again in glass paint and silver stain, divided by alternating blocks of pot metal blue and ruby glass. This background glass is a mixture of restoration work, probably 19th or early 20th century, and corroded pieces which may be original 15th or early 16th century work.