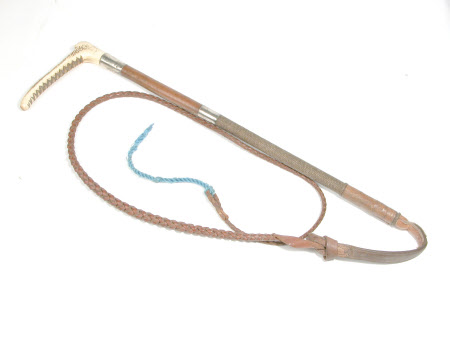 Hunting whip bound in leather with bone handle and silver collar which is inscribed A.H.B.P (A.H. Batten-Pooll) beneath griffin's head and battle axe. Also on second silver collar is J.S and S together with three silver marks.

From the Batten-Pooll family, Ugborough House, Ugborough, Devon, 1984. Given to the National Trust by Mrs. John Batten-Pool, Ugborough, Devon, in 1974. Arthur H. Batten-Pooll, VC had been severely wounded by a bomb near Colonne, France, on 25th June 1916, which broke and mutilated all the fingers of his right hand. He continued to direct operations and rescue other injured men and was awarded the VC for his actions. He was later awarded the MC for bravery at Cherisy on 3rd May 1917.