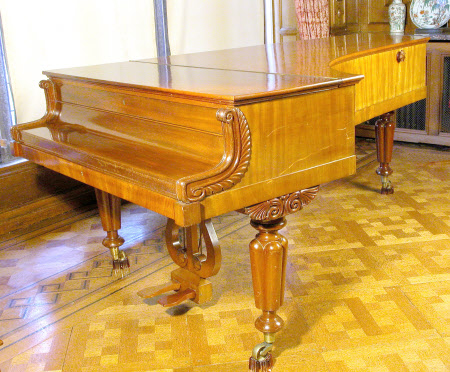 An early Victorian grand piano, No.14704, in mahogany case by John Broadwood, with carved decoration and lobed and turned supports. Interior of keyboard lid with brass inlay around label on which is written Patent/John Broadwood and Sons/Manufacturers to her Majesty/Great Pulteney Street, Golden Square,/London. (ex Music Room)

A gift of the Hon. Gerald Agar-Robartes, 7th Viscount Clifden, 1883-1966, who gave Lanhydrock to the National Trust in 1953 and continued to live there with his two sisters, Everilda and Violet, until his death in 1966.