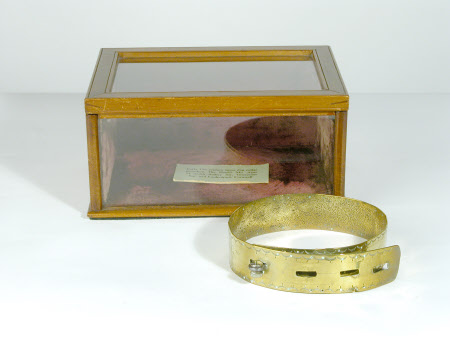 This heavy brass dog collar dates to about 1810 and was found whilst digging in Lanhydrock's gardens. How did it get there? What did Anna Maria think when her trusty hound returned without its expensive collar?

An early 19th Century brass dog collar inscribed with 'The Hon. Mrs. Agar'. In a glass and wood display box.

A gift from The Hon. Gerald Agar-Robartes, 7th Viscount Clifden, who gave Lanhydrock to the National Trust in 1953, and continued to live there until his death in 1966. Found in the garden at Lanhydrock and believed to have belonged to Anna Maria Hunt, who inherited Lanhydrock on the death of her uncle, George Hunt. She married Charles Bagenal-Agar, younger son of the 1st Viscount Clifden.