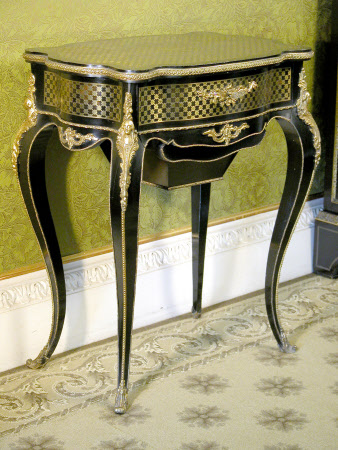 An ebonized, brass-inlaid and ormolu-mounted work table, French, by Maison Alphonse Giroux, Paris, third quarter of the 19th century. The top of serpentine form, inlaid with brass in a pattern of floral trellis, and with leaf-cast ormolu edge. The centre of the top with an inlaid engraved brass cartouche framing a cipher (including the letter 'M'). The underside of the hinged top fitted with a mirror plate within an ormolu border and enclosing various compartments lined with rosewood veneers. A tapering work drawer below. With shaped aprons and four cabriole legs edged with ormolu beading and with leaf-cast sabots. The lockplate engraved. --- Maison Alphonse Giroux was established in 1799 by François-Simon-Alphonse Giroux. Specialising in the production and sale of small items of furniture, 'objets d'art, de fantaisie et de papeterie'. In 1838, the company was taken over by Giroux's two sons, Alphonse-Gustave and André who, under the name of Giroux & Cie, continued and expanded the business, showing and frequently winning medals at the Exposition des produits de l'industrie française.

Date of acquisition not recorded but at Saltram by 1951 and accepted by HM Treasury in lieu of full payment of Death Duty from the Executors of Edmund Robert Parker (1877 - 1951), 4th Earl of Morley.