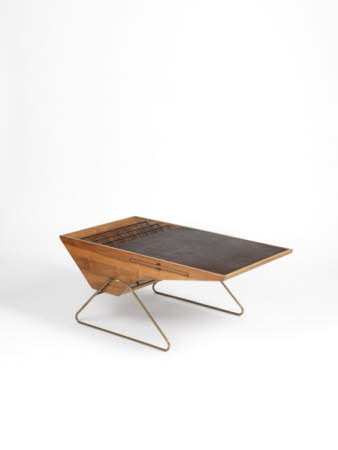 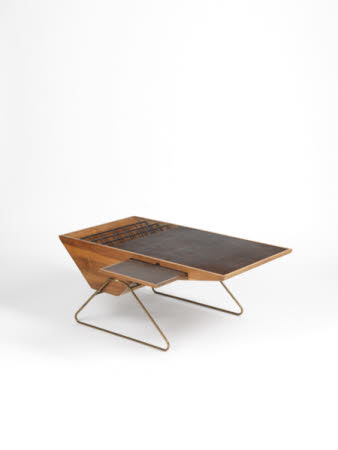 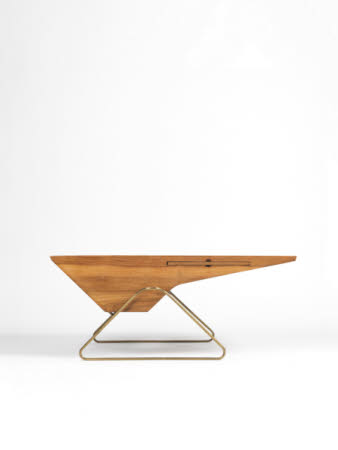 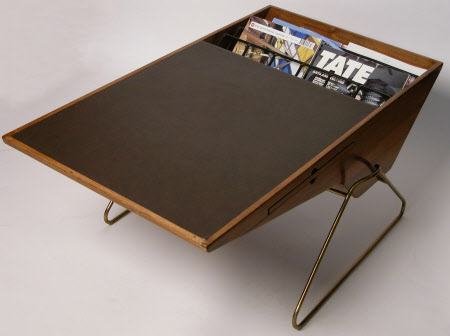 This simple and stylish magazine table, one of only a few variants made, reflects the whole design of the house known as The Homewood, created by the architect Patrick Gwynne (1913–2003) for his parents in 1938. Gwynne was an experimental pioneer of 20th-century modernism, who principally designed homes and interiors. The Homewood was a house raised upon stilts, which created a light-filled setting in which to appreciate the garden views and carefully placed furniture. Having been furnished by the architect over a 60-year period, the interior is not a monument to 1930s modernism; instead it reflects his search for functional and elegantly simple design. This table dates from the 1960s and is made from American walnut and painted steel with brass supporting legs. The top is covered in brown plastic leathercloth, a choice made in preference to pigskin leather, which was considered too impractical for everyday use. This simple style, which was partly inspired by contemporary European and North American design principles, became a classic and remains popular in variations of flatpack furniture today.

An American walnut, leathercloth and brass magazine table, British, 1960s, designed by (Alban) Patrick Gwynne (1913-2003). The rectangular top partially covered with brown leathercloth, and with a partially open black-painted steel rack for magazines. The top also fitted to either side with a pull-out slide lined with brown leathercloth to the top and underside. Raised on two triangular tubular brass supports joined by a pair of brass stretchers.

The architect Sir Denys Lasdun (1914-2001) described The Homewood, the bespoke house his former colleague Patrick Gwynne designed for his parents in 1938, as ‘the great love of Patrick’s life’. This table, designed by Gwynne for that same house thirty years later, exemplifies the architect’s approach to the Homewood and its furnishings from its completion in the 1930s to his death there in 2003. A pioneer of the modernist movement in Britain, Gwynne was innovative and ruthlessly unsentimental and his designs both functional and delightful. The Homewood is not a time-capsule of 1930s modernism but reflects sixty years of the architect-designer’s experimentation and search for perfection. Reflecting the design of the house itself, with its principal living area raised on pilotis (stilts), this magazine table has the lightest of brass stands balancing the asymmetric walnut table. Always ready to adopt new materials and make improvements, Gwynne replaced the original, too-easily-stained pigskin top, with more durable ‘American leathercloth’. Director of house-builder SPAN Leslie Bilsby (c1910-1990) was possibly involved in the fabrication of the table, a variant of only a handful made. This magazine table is a crucial design element in Homewood’s light-filled Living Room with its panoramic views. Placed with precision by Gwynne facing the huge windows, it sits between a pair of sheepskin-covered Bruno Mathsson (1907-88) designed ‘Model 36’ chaises longues (NT 864328), which he called ‘the most important furnishings of this room’. The three together create a conversation piece overlooking Gwynne’s garden; a scene that he admitted ‘can look somewhat incongruous after dark’. The Mathsson chairs were originally partnered with a table by the same Swedish designer and subsequently by another of Gwynne’s designs: a circular, glass-topped table (NT 864334). Gwynne decided this was too heavy and large, and instead introduced this more flexible and light-weight design in the 1960s. Gwynne’s playfulness is demonstrated by the hidden shelves and his practicality by the elegant way it holds magazines; titles perfectly visible but with capacity limited to avoid clutter. During Gwynne’s life it invariably held current editions of the Architects’ Journal, Tate Magazine and Country Life; demonstrating his modern taste informed by a traditional up-bringing.

The Homewood and some of its contents were given to the National Trust by Patrick Gwynne in 1999.