Head of the Farnese Hercules 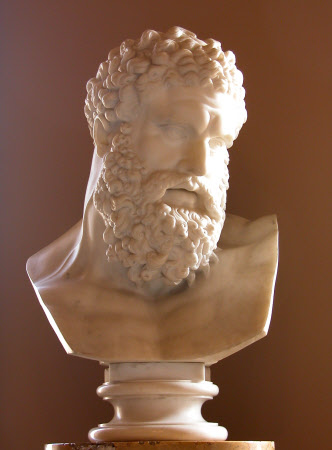 Sculpture, white marble, on white marble socle, Head of the Farnese Hercules (after the Antique), Italian School Bust of Hercules. Copy after the antique original in Naples and the Borghese collection. On yellow scagliola pedestal - ICK/SC/89. The statue was first recorded in 1556 when it was in the Palazzo Farnese by Aldrovandi who said it had been found in the Baths of Caracalla in 1546. The head had been apparently found six years before the body in a well in Trastevere in Rome. The enormous statue was displayed as a whole in the courtyard of the Palazzo Farnese until 1787 when it was taken to Naples for restoration and by 1792 was taken to the museum there.