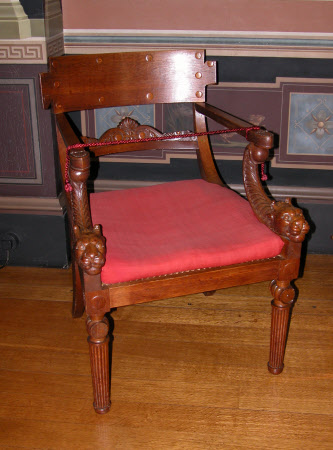 An oak and cane 'Klismos' open armchair, after a design by Thomas Hope, English, circa 1810 The curved top rail with raised faux stud work above a scroll and anthemion horizontal stretcher. The arms with anthemion carved terminals held by scroll carved supports and leopard head terminals. The caned seat on reeded turned front legs headed by roundels and sabre back legs. With a loose textile seat cushion. Possibly originally painted.

This 'Grecian' klismos chair reflects the work of the pre-eminent designer Thomas Hope in the early 19th century. Hope was greatly influenced by his extensive Grand Tour travels across Europe as well as Greece, Turkey and Egypt. Hope’s Duchess Street home became the showcase for his vision of antiquity across different cultures, incorporating Egyptian, Greek, Roman, and Indian elements. Hope officially opened his home in 1802 to visitors, and the Prince of Wales made an appearance at the grand opening. Hope went on to publish his designs in 1807 with full measurements as a way to encourage accurate imitation of his work rather than the lesser copies that were being produced by his contemporaries. His publication Household Furniture and Interior Decoration was notable for the manner in which it represented furniture designs in outline only, eliminating any sense of depth, shadow, or stylistic contrasts. Hope’s decision to depict his designs in this way reflects his fundamental allegiance to the Neo-classical aesthetic. See Edward T. Joy, English Furniture 1800-1851, London, 1977, p. 83 Sotheby's ‘The Evill / Frost Collection III’ 16-06-2011 lot 335 for a very similar chair. Hope, Thomas - Household Furniture and Interior Decoration,1807 plates 11 & 19 for comparable design features. Smith, George - A Collection of Designs for Household Furniture, 1808 plate 42 'Library Fauteuil' James Weedon (May 2017)