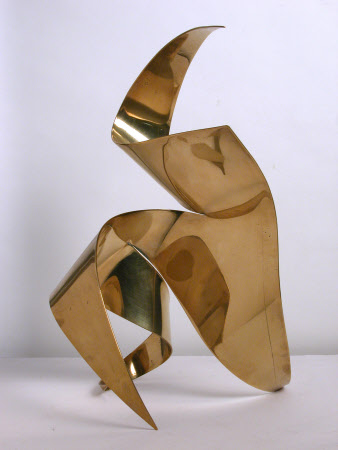 Sir George exhibited this piece at the Museum of Modern Art, Madrid in June 1965. Alfaro made the sculpture using a single sheet of brass, which was cut, bent and moulded in shape. This was a process he frequently used between1959 and 1964.

Brass sculpture, Avant (The Future) by Andreu Alfaro (Valencia 1929 - 2012), 1963. Abstract form: Free-standing abstract brass sheet piece, twisted four pointed form. This work has an intense dynamic and spatial quality. An interest with ‘the curve’ runs through Alfaro’s career. He looks at the curves of the body in classical sculpture and takes this form to its limits. This piece is full of movement and rhythm but also tension as the curves reach out into the surrounding space. Alfaro began making sculptures from simply cut, bent and moulded sheets of metal in 1959, working with this process until 1964.