The Gates at Gundimore, Mudeford, Dorset 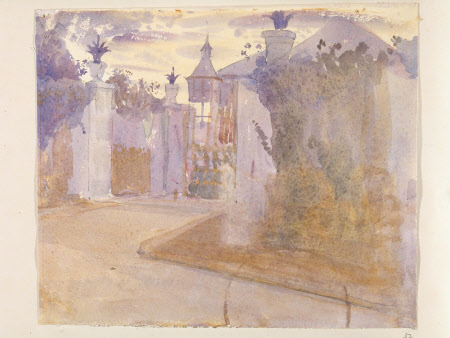 Watercolour on paper, The Gates at Gundimore, Mudeford, Dorset by Barbara Townsend, of the walls and piers surrmounted by urns holding succulents bordering the house at Gundimore, the roofline of which is visible beyond. Gundimore is a house near Avon Beach in Mudeford, Dorset built in 1796 for the poet William Rose. His visitors included fellow poets Coleridge and Southey. Sir Walter Scott stayed there while writing his epic poem Marmion. The building is of the most unusual design, said to have been built in the shape of a Turkish tent, complete with gilt Arabic inscriptions to remind the original owner of his travels in the east. It consisted of a centre section and two wings. The centre section has five windows with a large curved centre bay with a shallow pitched, conical roof. At the south west corner of this bay is a round, two-storey turret, shaped like a squat house with the upper storey almost completely glazed. The north eastern wing is now Scott's Cottage. William Rose is believed to have designed at least part of the house himself. An inscription in pencil at the bottom of the album page reads 'Gundimore'. Within a bound album (MHS/P/58) containing other watercolours by Barbara Townsend. The album page is numbered 17. The number 32 is annotated in pencil below bottom right-hand corner of the watercolour.