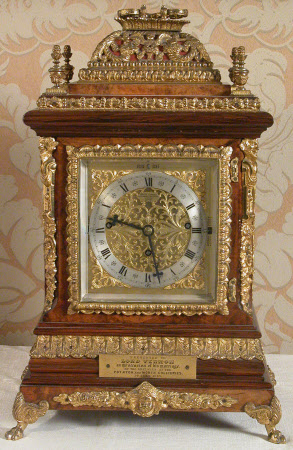 Decorative clocks are emblematic of the Victorian period. Ormolu describes the gilt brass, applied using a fire gilding process. The technique originated in France and became popular in England from the 1760s onwards.

An eight day English chiming mantel clock in ormolu mounted walnut case by Charles Frodsham, London. It has a rectangular face with Roman numerals and small Arabic five minutes, engraved and pierced scrollwork, a steel chapter ring and strike and silent movements. The hands are blued steel fleur de lis. Inscribed on a gilt brass plate on the front of the clock: 'Presented to Lord Vernon on the occasion of his marriage by the employes (sic) at Poynton and Worth Collieries, 14th July 1885.' This refers to the marriage of George William Henry 7th Lord Vernon (1854 - 1898) to Frances Margaret Lawrance (d 1940). The clock is signed on the back plate: 'Charles Frodsham, Clockmaker to the Queen, 84 Strand London'. c.1885.

Presented to Lord Vernon on the occasion of his marriage by the employees at the Poynton and Worth Collieries, 14th July 1885.