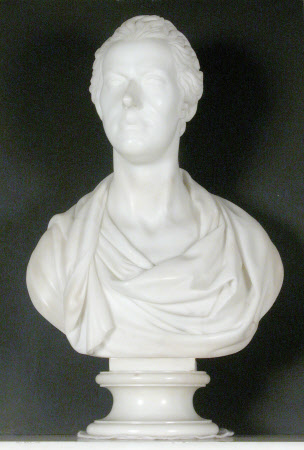 White marble sculpture on turned socle, The Rt Hon. William Pitt the younger MP (1759-1806) by Joseph Nollekens, RA (London 1737 – London 1823), 1807. A portrait bust of William Pitt, facing with head turned slightly to left with classical drapery wrapped around shoulders. This piece survived the Attingham sales of 1827, unlikely to have been purchased by the 3rd Lord Berwick, possibly bought-in, No.72 in Mr Robins' catalogue of the sale at Attingham on 30 July 1827, where it was described as 'a beautiful and highly wrought bust of the Rt. Hnbl. William Pitt sculptured in white statuary marble by Nollekens in 1807 2ft 4ins high'. According to the Farrington diary 'this bust was chiselled from a post mortem cast the artist never having seen the original till called upon to make this mask. Nollekens sold 74 bust of William Pitt at 120 guineas each.......'