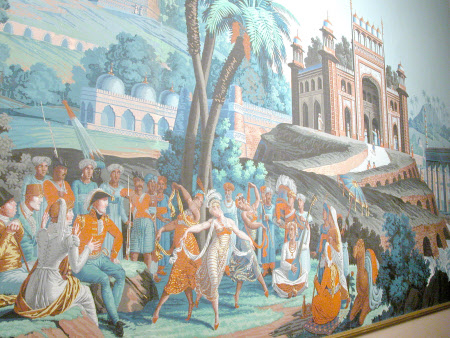 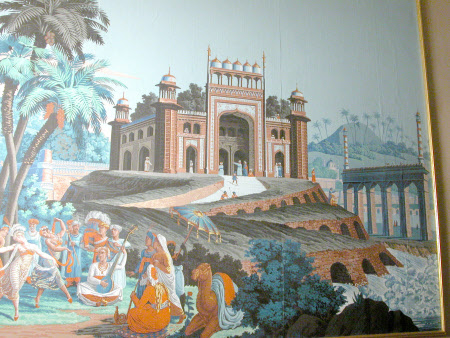 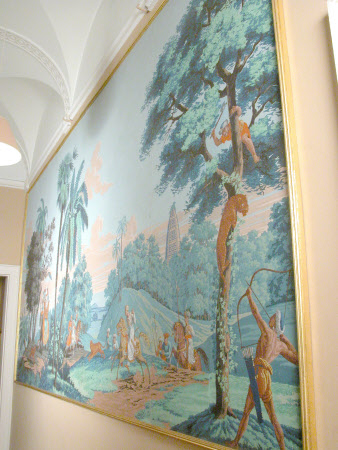 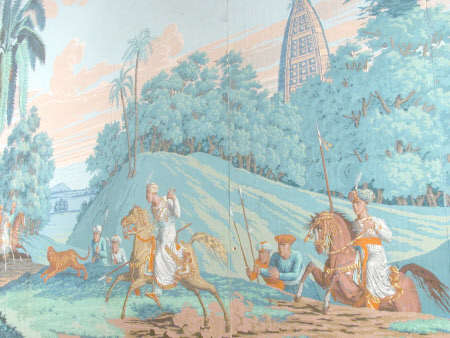 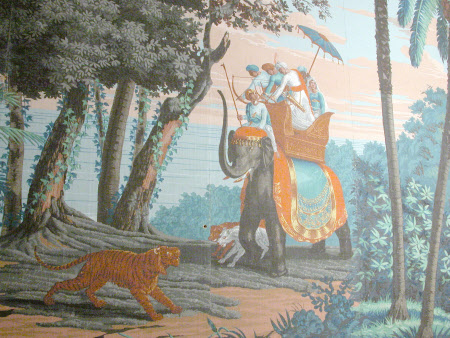 Two wallpaper panels, previously attributed to Joseph Dufour but now considered to be probably by Velay of Paris. One large rectangular wallpaper panel, in six vertical strips, hand block printed with scene of dancing houri surrounded by musicians and watched by Western visitors. Mughal palace to the right with Hindu palace on the left. Hand blocked paper. Mounted in a narrow ribbed giltwood frame. The second large rectangular wallpaper panel in nine vertical strips, is hand block printed with a scene of a tiger hunt. Indian huntsmen mounted on horses and elephants, armed with spears, axes, bows and arrows. In landscape setting with palm trees. The scenes, some of which are said to have been taken from William and Thomas Daniell’s “Oriental Scenery” published in London in 1795, depict the right bank of the River Ganges, with tigers being hunted on horseback and mounted on an elephant. Two temples are taken from Daniell’s engraving “Hindoo Temples at Bishabund” (op. cit. pl. II). Mounted in a narrow ribbed giltwood frame. The “Tiger Hunt”, variously known as “Paysage Indien”, “Chasse au tigre”, “Chasse indienne” or “Vues de l’Inde”, was attributed by Nancy McClelland to Dufour and dated to 1815 (N. McClelland, Historic Wall Papers, Philadelphia and London, 924, p. 360). She illustrates a set in the Putnam-Hanson House, 94 Boston Street, Salem, Massachusetts. However, the set has been attributed to the Velay Manufactory (see O. Nouvel-Kammerer, Papiers Peints Panoramiques, Exhibition Catalogue, Musée des Arts Décoratifs. Paris, 1998, pp. 306-307). The Velay Manufactory was a contemporary of Dufour and active in Paris after 1807. Other examples of this set are in a private collection in Puy-de-Dôme, Rhone, Haute-Saône, France, in Belgium and Jönköping, Sweden.