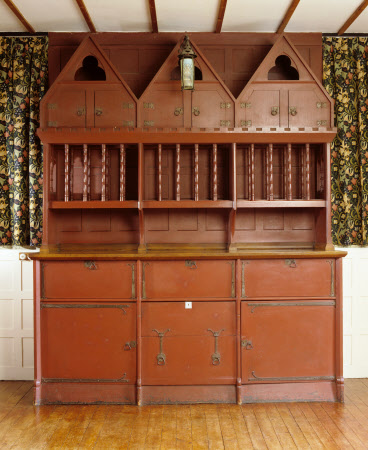 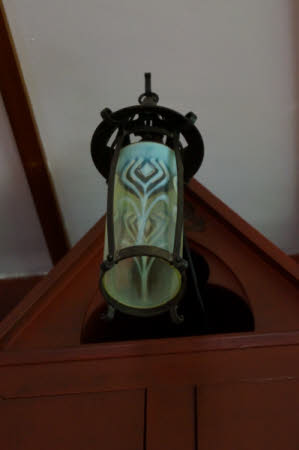 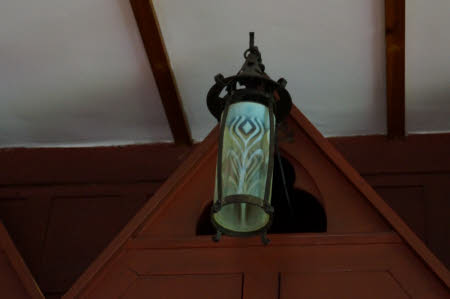 An oak and 'dragon's blood' red lacquered canopied dresser, English, designed by Philip Webb, circa 1860-65, the upper section with panelled backboard, fronted by three projecting arched cupboards, each with a trefoil-shaped cut-out to the top above a pair of cupboard doors, the central trefoil cut-out with an iron bracket supporting the arm and body of an iron lamp frame and glass tubular shade with opaque decoration, the three cupboards above a dentil-ledge, three open sections below the cupboards, each section with eight vertical turned dividers, the side walls of these open sections with two cut-out arched windows divided by a banded column, all supported on a lower plain oak surface, the lower section with three drop-front cupboards above a drawer (lock replaced with aluminium copy) flanked by two cupboards, the hinges, lockplates and handles throughout are made of iron with a brown patina. It is thought that the canopy may have been inspired by medieval ceremonial chairs.

The dresser was installed at Red House while William Morris and his family were resident, circa 1860-65, it has remained in situ ever since. The National Trust purchased Red House in 2003 to ensure its permanent preservation. The dresser was acquired with the house as part of this purchase.