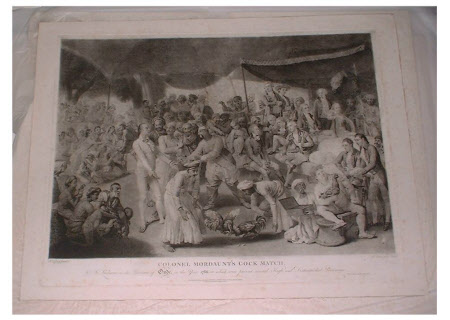 Print, engraving, Colonel John Mordaunt' Cock Match after Johann Zoffany, RA (Frankfurt am Main 1733 - Kew 1810). A print showing a cock fight with a large crowd looking on. An Arundel print with textile lining.Asaf's court at Lucknow was the most extravagant of the native courts, attracting numerous European adventurers lured by the financial prospects and exotic lifestyle. Faiz Bakhsh wrote that Asaf's 'natural inclinations and attachments were for low, ill-born and base-minded associates ... He delighted in meaningless amusements and was immensely pleased with anyone who indulged in filthy language; and the more obscene the conversation was in any company, the better he was pleased' (quoted in Archer, p.143). The illiterate Mordaunt was a particular favourite. An illegitimate son of the Earl of Peterborough, he was commander of the Nawab's bodyguard and leader of court amusements, including the cock-fights. At Lucknow, Indians and Europeans enjoyed social equality and personal friendship. Many Europeans had Indian wives, or bibis, and children. The central figures of the Lucknow court are portrayed here: Colonel Antoine Polier (in a red coat, standing under the awning), a Swiss officer who was engineer to the Nawab and possessor of several bibis and a number of children; John Wombwell (seated to the right holding a hookah), the East India Company's paymaster at Lucknow; and below them (in uniform, seated on the dais) the French adventurer Claud Martin. The notorious Martin kept four wives and was, among other things, the only man ever known to have successfully performed a surgical operation on himself. Lord Valentia wrote in an account after Martin's death: 'a more infamous or despicable character ... never existed. He had not a single virtue, though he laboured to assume the appearance of several' (quoted in Philip Davies, Splendours of the Raj, London 1985, pp.93-4). Standing beside Wombwell is the artist Ozias Humphrey with a hand on Zoffany's shoulder. Standing at the far right corner, wearing a blue coat and holding a white bird, is Robert Gregory, the assistant to the Governor-General's representative. Gregory was reportedly cut out of his father's will for cock-fighting. The rotund European in white, sitting in the right foreground with a fighting-cock, is Lieutenant Golding of the East India Company's Corps of Engineers. Terry Riggs, Tate Gallery. The original is in the collection of the Tate Gallery, London