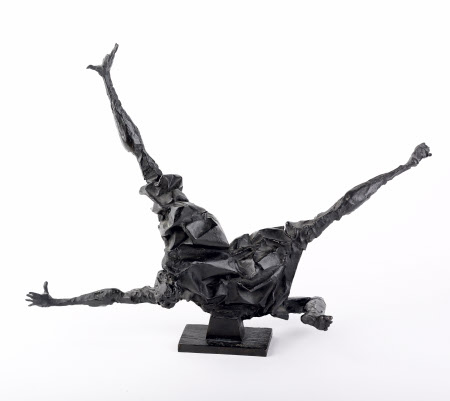 Sculpture, bronze; Women of Belfast 2 (Women in Crossfire II); F.E. McWilliam (1909-1992); 1972. A bronze sculpture of a woman caught by the impact of an explosion. One of a series of twenty sculptures entitled Women of Belfast, made in 1971-1972 as a response to the escalation of violence in Northern Ireland, in the early years of the late twentieth-century Troubles.

A bronze sculpture, entitled Women of Belfast 2 or Women in Crossfire II, by F.E. McWilliam (1909-1992), from his series Women of Ireland, made in 1971-72. The woman is thrown into the air by the impact of an explosion, and is shown horizontally and spread-eagled, both arms outstretched and her fingers splayed, her left leg bent, right leg outstretched. She appears to scream as she is thrown upwards. On an integral support, on a rectangular base with a textured surface. The artist’s signature and the edition number at front right of the base. The series of twenty sculptures forming the sequence Women of Ireland was made by McWilliam in response to a specific event, the bombing, probably by the Provisional IRA, of the Abercorn restaurant in Belfast on 4 March 1972. The Abercorn was on 7-11 Castle Lane and had a restaurant on the ground floor and a bar on the floor above. On 4 March, the restaurant was packed with Saturday afternoon shoppers. At 4.30 p.m., a bomb exploded without warning, killing two Catholic women outright and injuring a further 130 people, many of them suffering life-threatening and -changing injuries. Although no organisation claimed responsibility for the bombing and no charges were ever brought, it is generally believed that the attack was the work of the Provisional IRA and was motivated by the fact that the upstairs bar was used by British army soldiers. However, because of the number of Catholic victims, the attack caused especial revulsion and anger in Nationalist and Catholic communities. For F.E. McWilliam, the bombing brought back childhood memories of the disturbances leading up to the establishment of the Free State, recalling his home town of Banbridge in flames and his father, a doctor, tending to a child who had been shot. In the Women of Belfast series he was particularly concerned to represent the effect of bomb blast. McWilliam wrote that ‘These sculptures are concerned with violence, with one particular aspect, bomb-blast – the women as victims of man’s stupidity.’ (Gooding 1989, p. 21). The twenty sculptures were first shown in October 1973 at the Dawson Gallery in Dublin and subsequently the Waddington Gallery in London and the McClelland Galleries International in Belfast. One of the new elements that these sculptures brought into McWilliam’s work was the use of drapery, which he wanted to be about shape and the meanings it could convey: ‘I got started on the drapery as a sort of metaphor for what I was trying to express. I’ve never used drapery before. I regarded drapery as a superficial thing, it wasn’t sculptural. But getting excited about the shapes that drapery can go into, it became a fundamental part of the thing…’ (Ferran and Holman 2012, p. 71). It has been suggested in the context of the Women of Belfast series that ‘F.E. McWilliam’s figures communicate because all the body is involved – extended hands, splayed legs, are in this sense more vocal than faces. Indeed in many instances the heads of the figures are hidden, buried in clothing. Equally the clothing is stripped back to reveal the taut muscles of buttock and thigh: the figures have sacrificed any quality of seduction that normally partial nudity would impart: their predicament dehumanises them, they become the poignant contradiction of W.B. Yeats’ “engines of delight”,’ (T.P. Flanagan in Marle and Flanagan 1981, pp. 33-34. McWilliam gave to the present sculpture, the second bronze in the series, the additional title ‘Women in Crossfire II’. It was cast in bronze in an edition of five, the first three casts made by John Galizia & Son Ltd and the other two by Art Bronze. The Argory cast is the first and was retained by the sculptor who, on his death in 1992, bequeathed it to Mr J.R.S. Smyth of Worcester, from whom it was acquired by the Art Fund, for presentation to the National Trust for display at the Argory. The last private owner of the Argory, Walter MacGeough Bond, was one of the most active collectors of contemporary art in Northern Ireland, although his collection was dispersed when the Argory pased into the care of the National Trust. He was one of the lenders to the 1981 F.E. McWilliam touring exhibition, organised by the Arts Councils of Northern Ireland and the Republic of Ireland. Jeremy Warren June 2022