Hermes Propylaios as a youth and adult 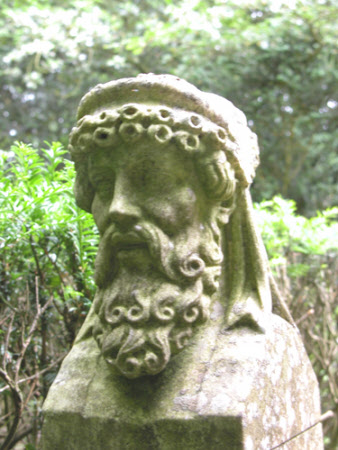 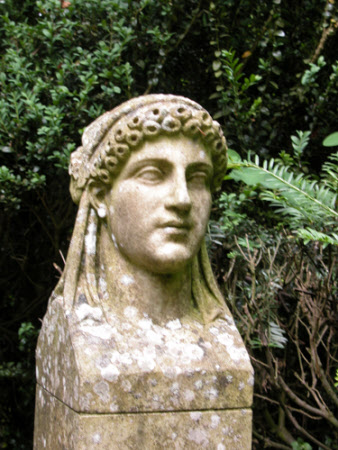 Marble, Hermes Propylaios as a youth and as an adult, Italian (possibly Neapolitan) School late 19th– early 20th century, after the antique. A double or janiform herm with Hermes represented as a beardless youth with two rows of short corkscrew curls and fillet and as bearded adult in the archaizing style with two rows of corkscrew curls, fillet, and elaborately curled beard. Mounted on tall, thin marble pedestal. Part of a set of four janiform hermai stationed at the corners of an intersection of four pathways, near the Rose Garden of Anglesey Abbey (see NT 516668–516670).

The herm is a type of Ancient Greek sculpture associated with Hermes, messenger of the gods and protector of borders, roads, and travellers. Hermai in their earliest form were piles or blocks of stone representing the deities, and later developed into quadrangular pillars topped with a sculpted head and phallus, most often depicting Hermes. Hermai were venerated objects and placed at strategic points along roadsides or crossroads, outside of houses or to mark boundaries. They were believed to ward off evil, bring luck, wealth, and in some parts of Greece fertility. The two-faced rendering of hermai is a Roman variation invoking Janus, the god of transitions and journeys, of gates, doorways and passages, of beginnings and endings, and of duality. Janus himself is usually depicted bifrons, with one face looking to the future and one to the past. As with Hermes Janus is a mediator between different worlds and in this respect the janiform hermai represent opposing and complimentary relationships such as old and young, divine and mortal, god and follower, male and female, husband and wife. The Anglesey Abbey examples, placed at the junction of four pathways leading to and from house and garden, are typical of the janiform type. The husband-wife/male-female pairing is seen in NT 516668 ad NT 516670, with Dionysus and Zeus and their consorts Ariadne and Hera back to back, while NT 516671 is an example of the young/old juxtaposition in which Hermes is depicted as a beardless youth and as a bearded adult in the Propylaios style. NT 516669 could represent the fraternal bond in an adult Hermes paired with a youthful Dionysus, his youngest sibling, or the god/follower relationship with Dionysus, god of wine, paired with one of his female followers (maenads). At the turn of the 20th century janiform hermai depicting Silenus and a bacchante and Dionysus and Ariadne were found in the peristyle of the House of the Vettii, considered to be the best preserved domus in the ancient city of Pompeii. Excavated for the first time between 1894 and 1896, the hermai are of similar proportions to the Anglesey Abbey group and are mounted on tall cylindrical pillars carved with a twining ivy motif. According to Lanning Roper, the hermai were brought to Anglesey Abbey from Park Close, the Surrey home of Lord Fairhaven’s mother Cara Rogers Broughton who had apparently purchased them in Naples. As was the practice in Florence and Rome, it is likely that Neapolitan sculpture workshops were producing reproductions or derivations of local antiquities for the tourist market. Alice Rylance-Watson August 2019

Reputedly brought back from Naples by Lord Fairhaven's mother, and originally placed in the gardens of Park Close, Englefield Green; bequeathed to the National Trust by Urban Huttleston Rogers Broughton, 1st Lord Fairhaven (1896-1966) with the house and the rest of the contents.