Pilgrim resting on his staff 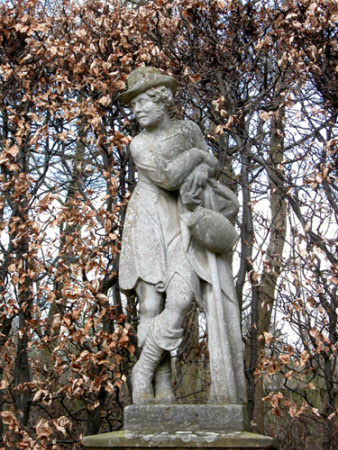 Portland stone, a pilgrim resting on his staff, probably British (English) School, after Giambologna (1529-1608), probably 19th century. A full-length statue of a pilgrim resting on his staff and looking to proper right. The male figure is of middle age with curly hair and beard and wears a hat with a shell badge, a tunic with square neckline and torn hem, and calf-length boots. Draped over his staff and held in his proper left hand is a cloak and a barrel-shaped flagon. A pack is slung over his proper right shoulder. The statue is a free and scaled up interpretation of a model by Giambologna made in around 1574-80 and cast in several versions by Antonio Susini, Giambologna's chief caster in bronze (see, for example, inv.no. PV 10809, Museo Nazionale del Palazzo di Venezia, Rome, known as 'Viandante' or Wayfarer). The statue is known at Anglesey Abbey as 'The Pilgrim' because of the scallop shell badge on the figure's hat which is not present in the Giambologna model, traditionally catalogued as 'Peasant resting on his staff'. On an integral limestone base and mounted on a sandstone pedestal.

The model was first recorded in a Medici document of 1601, when Antonio Susini (1558-1624) was provided with a silver figurine of a 'Villano con capello con bastoncino che s'appogia in su il bastone' ('A peasant with hat and staff resting on his staff') which he was to cast in bronze (Avery and Radcliffe 1978, no. 137). The model, a pendant to a figure of a seated bagpiper, was by Giambologna, the great Flemish-born court sculptor to the Medici (for the bagpiper see inv.no. PV 10810, Museo Nazionale del Palazzo di Venezia). Bronze statuettes after both models were sent by the Medici as diplomatic gifts to Henry Frederick, Prince of Wales (1594-1612), and passed into the collection of Charles I (Watson and Avery 1973). The genre figure of the peasant, typical of the art of the Low Countries, gained popularity in Italy following Giambologna's introduction of such subjects at the Florentine court (Brook 1991). The sculptor's bronzes were also adapted for garden statuary, (Weihrauch 1967, p. 9), but only one adaptation of the peasant resting on staff model is known as a full-size stone statue: a Villano carved for a fountain in Livorno by the sculptor Romolo Ferruccui (1544-1621) between 1605 and 1628 (Zikos 2012). The Anglesey Abbey statue appears to be 19th century pastiche of Giambologna's model, figured as a middle-aged, bearded pilgrim (with distinctly 19th-century sideburns) as opposed to the peasant youth figured in Susini's bronzes which feature no attributes of a pilgrim. According to Lanning Roper, Lord Fairhaven acquired the statue 'from a friend's garden in Suffolk', though no further details have been preserved (Roper 1964, p. 51). Alice Rylance-Watson 2019