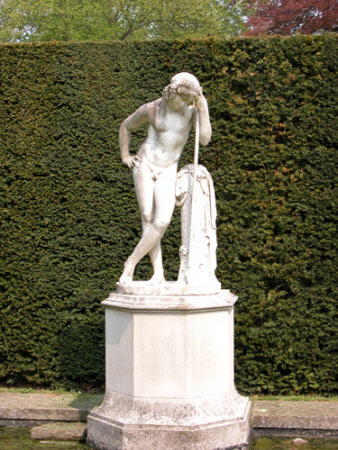 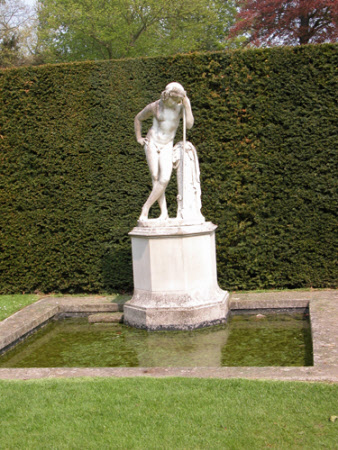 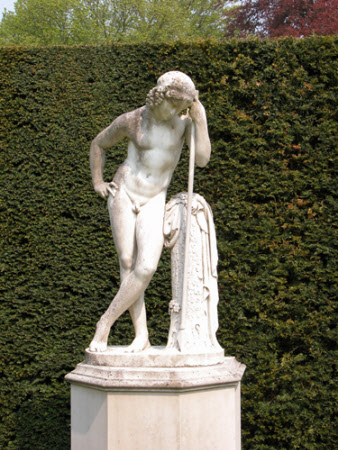 Narcissus was a beautiful young man who rejected all his suitors, until, falling in love with his own reflection, he wasted away. Carved by the Victorian sculptor William Theed in Rome in 1848, this statue is very close to the original commissioned by Prince Albert for Osborne House. It stands in the Narcissus Garden at Anglesey Abbey, home to one of the finest collections of garden statuary in England, created by Huttleston Broughton, 1st Lord Fairhaven, during the first half of the 20th century.

Carrara marble on Portland stone, Narcissus, William Theed the younger (Trentham 1804 – Kensington 1891), signed and dated 'W.THEED./FECIT.ROMA.1848'. A reduced full-length figure of Narcissus carved of Carrara marble in Rome by William Theed the Younger. Narcissus as a youth, nude and in contrapposto, his long curls styled with a fillet. He leans on a spear and gazes upon his own reflection, his cloak draped over a tree stump at proper left. Mounted in a pool of water on an octagonal chamfered Portland stone pedestal engraved at proper left 'AD 1947'. In Ovid's Metamorphosis Narcissus was a beautiful hunter who was vain and proud and who rejected Echo's love. As punishment, Nemesis, the goddess of retribution, lured a thirsty Narcissus to a pool where he fell instantly in love with his own reflection. Realising his love was unrequited, he pined away and died, turning into the flower which bears his name.

This is one of three signed replicas of an original statue of Narcissus commissioned by Albert, the Prince Consort, in 1844-5 (Royal Collection Trust, RCIN 69002). The original statue was carved in Rome in 1847 and was at Osborne House until 1902. Copies at Anglesey Abbey, Temple Newsam, and formerly Manor House (Clifton Hampden), were produced in Rome a year later, in 1848 (Christie's, The Manor House at Clifton Hampden, the Home of Christopher Gibbs Esq., 25-26 September 2000, lot 108). One of these copies may have been retained by Theed himself, as a Narcissus was exhibited at the Great Exhibition of 1851 (Catalogue, p. 847, no. 79) and at the Art Treasures Exhibition, Manchester, 1857, with statues of Ruth and Rebekah (Catalogue, pp. 133-4, nos.13, 35 and 59 respectively). William Theed the Younger was a prominent and prolific sculptor who enjoyed extensive patronage from Prince Albert and Queen Victoria. Trained at the Royal Academy Schools, Theed went to Rome in 1826 to study under the celebrated neoclassical sculptors Bertel Thorvaldsen, John Gibson, R J Wyatt and Pietro Tenerani. After nearly twenty years there, in 1844-5 Theed received a landmark commission via John Gibson to produce a series of statues of Osborne House. Two of his designs - Narcissus and Psyche lamenting the loss of Cupid (RCIN 2044) - were accepted by Prince Albert, and the figures were completed in 1847. Theed clearly drew on his tutor John Gibson's Narcissus, a diploma work submitted to the RA in 1838 (Royal Academy, London, inv.no. 03/1918), and on antique prototypes such as the Hermes of Praxiteles, the Apollino (Uffizi, Florence) and the Apollo Sauroctonus (Louvre, MR 78 or Ma 441). Theed returned to England in 1848 and established a highly successful practice in Covent Garden, his output mainly in portrait busts and funeral monuments. Further commissions for the Prince Consort included a statue of Sappho (RCIN 2079), a bust of Periander (RCIN 41031), six busts after the antique as well as decorative work for Buckingham Palace. On Albert's death in 1861, Theed was summoned to take a death mask and casts of the Prince's hands which Victoria kept at her bedside. He went on to produce several posthumous busts (e.g. RCIN 34098), commemorative statues, and 'The Parting', a full-size group of the royal couple holding hands and wearing Anglo-Saxon dress (RCIN 60778). Theed was also one of several sculptors who contributed to the Albert Memorial. Alice Rylance-Watson 2019

Purchased by Urban Huttleston Rogers Broughton, 1st Lord Fairhaven (1896-1966) from Bert Crowther, Syon Lodge, 9 October 1952, £50.0.0; bequeathed to the National Trust by Lord Fairhaven 1966 with the house and the rest of the contents.