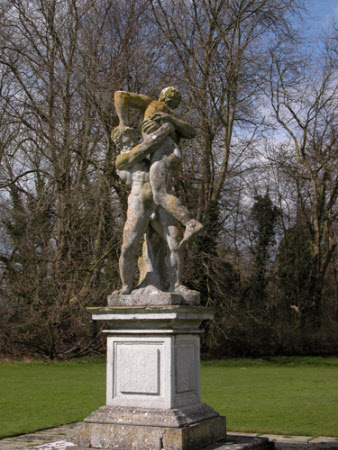 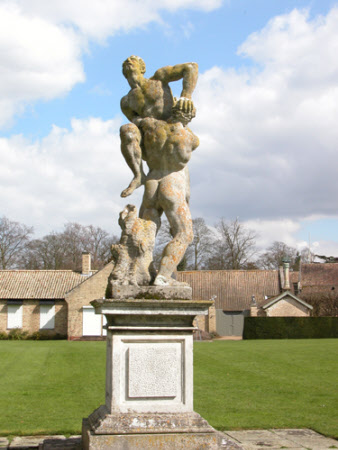 Portland stone, Hercules and Antaeus, probably British (English) School, after Giambologna (Douai 1529 - Florence 1608), probably c. 1675-1725. A sculpture of Hercules wrestling Anateus, after a model by Giambologna. Hercules, his back arched, has lifted Antaeus off the ground and is crushing the breath – and life – out of his chest; Antaeus, his head raised heavenwards, attempts to release himself from this grip by pushing the top of Hercules’s head with his left hand, with all his might. Antaeus was the King of Libya, the son of Poseidon and Gaia, or Mother Earth. He was in the habit of forcing strangers to wrestle with him, always winning, since he was invincible so long as he maintained contact with his mother, and then killing them and using their skulls to roof a temple of his father. He either challenged or was challenged by Hercules when the latter was passing through Libya to Mycenae with the apples of the Hesperides. Once Hercules realised the source of his strength, he lifted him off the ground, cracked his ribs, and held him aloft until he died. Formerly entitled 'The Wrestlers'. Mounted on a square York stone pedestal.

The subject is not one of the canonical Twelve Labours of Hercules (who performed it, to rid mankind of a plague, on his way back through Libya from collecting the Apples of the Hesperides). It was, however, that of one of the six Hercules groups cast by Giorgio d’Antonio in silver from models by Giambologna for the Tribuna of the Uffizi in 1578. The pose of the Hercules derives from an Antique marble in the courtyard of the Pitti Palace, and that of Antaeus from bronzes by Antonio Pollaiuolo and Bartolomeo Ammanati. Numerous versions cast in bronze followed, the finest of which was in the collection of Rudolph II and is now in the Kunsthistorisches Museum in Vienna (see exh. cat. Giambologna, Royal Scottish Museum, V&A, and KHM, 1978-9, no.87, discussing the type, and listing half a dozen other versions). One of these is in the Wallace Collection, and is incised with the number 49 from the inventory of bronzes belonging to the French Crown before the Revolution: Louis XIV owned no less than three in 1684 (see exh. cat. Les Bronzes de la Couronne, museé du Louvre, 1999, no.49, p.86, and nos. 1 & 57, pp.74 & 89 – whereabouts of both unknown; and Robert Wenley, French Bronzes in the Wallace Collection, 2002, fig.11, as 'possibly French, probably by 1662', whereas the Louvre catalogue had called it 'Florence, atelier de Jean Bologne'). There does not appear to be any certain record of a bronze version in England as early as around 1700, but Nost’s lead sculptures show that he must have had access, if not to such a bronze, then for a plaster cast of one. Formerly at Bell Weir House, Egham, this is an adaptation, with a tree-trunk added for support, of the model by Giambologna that was first cast in silver; and subsequently in bronze. A version in stone was mounted at Studley Royal, within John Aislabie's great early 18th-century water garden (NT 530887), and another still, paired with a second stone group of Samson and the Philistine, is one of the original sculptures at St Paul’s Walden Bury, in the gardens laid out by Edward Gilbert between about 1727 and his death in 1762 (illustrated in the leaflet published in the 1970s, attributing both to John Nost II). Versions in lead (probably by John Nost the Elder, who included such a group at £80 in his Melbourne Hall price-list; see R. Gunnis, Dictionary of British Sculptors, 1968, p.280; I. Roscoe, A Biographical Dictionary of Sculptors in Britain, 2009, p.914) are at Castle Howard, Grimsthorpe, and Trent Park (ex Stowe). Alastair Laing, edited by Alice Rylance-Watson 2020