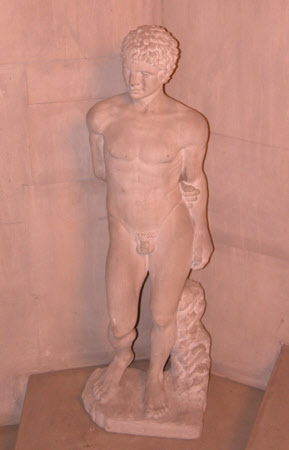 Portland stone, A Young Athlete (NEAPOΣ AΘΛHTHΣ), Georgios (George) Mavrogenis (Limassol d. 2019), 1952, signed front edge of base. A Portland stone statue of a nude male youth standing in contrapposto, with the proper right arm bent at the elbow behind the back and holding the proper left forearm, gazing to proper right, with a tree stump behind the proper left leg. On an integrally-carved base. The statue was carved in 1952 by Georgios (George) Mavrogenis, a young Cypriot artist studying under the British sculptor Bainbridge Copnall (1903-73) who was at the time principal of the Sir John Cass School of Art, London. According to newspaper reports, the sculpture was carved out of a piece of Portland stone retrieved by Mavrogenis from war rubble. The figure was exhibited in London and purchased by Lord Fairhaven for £100. The National Trust is grateful to Mr Paris Gavrielides, grandson of Georgios Mavrogenis, for providing this information.