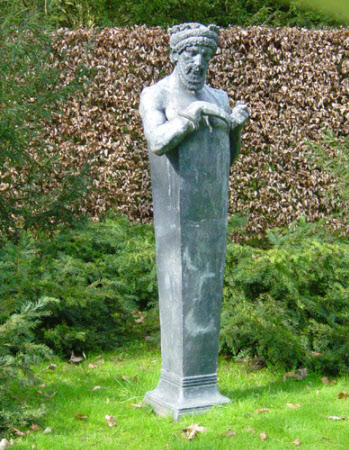 Painted lead, Asclepius, Bromsgrove Guild of Applied Arts (1898-1966), c. 1901-17. A term of Asclepius, the Roman god of medicine and healing, with serpent denoting the Rod of Asclepius, the symbol of medicine, coiling around his hands. Asclepius’ head turned sharply to proper right, his hair and beard tightly coiled. He wears a diadem of flowers and oak leaves. Possibly produced c. 1913-17 when the Bromsgrove Guild of Applied Arts’ lead workshop was at Weaman Street, Birmingham. Cast in lead using the lost wax technique; with remains of white paint. On an integral base with Bromsgrove Guild stamp, inscribed 'BROMSGROVE GUILD/WORCESTERSHIRE'. Much of the serpent has broken off.

The Bromsgrove Guild was founded in 1898 by Walter Gilbert (1871-1946), cousin of the more famous Sir Alfred Gilbert of the New Sculpture. Influenced by the Arts and Crafts movement, the Guild grew from the Bromsgrove School of Art into a significant commercial enterprise operating in a range of disciplines from metallurgy, furniture and wood carving to stained glass, enamelware and plasterwork. The Guild’s policy was to enable members to ‘adopt the more prolific method of thinking and working in their media’ (Gilbert, The Craftsman, 1903). In the early years members and apprentices operated from ‘individual studios and workshops altogether independent’, with each ‘department financed and controlled separately by the guildsman of the same department’. Guild workshops were located across Great Britain, but the main wood, plaster and metal departments, including the lead, were initially based at Station Street, Bromsgrove, Worcestershire. At its peak the Guild employed around 150 craftsmen and women, expanding rapidly in the first decade of the 20th century. In 1900 the Guild won a place in the British Pavilion of the Exposition Universelle, Paris, winning nine medals and several high-profile commissions, and soon recruited master craftsmen from across Britain and Europe. Celebrated commissions include the gates of Buckingham Palace, the ironwork around the Queen Victoria Memorial, and the Liver birds on the Royal Liver Building, Liverpool. From 1913 Walter Gilbert and Louis Weingartner, a Swiss metalworker appointed in 1904 as the Guild’s chief designer, produced lead statuary at a workshop in Weaman Street, Birmingham. The moulding of Asclepius is close to the statues of the Four Apostles made in 1914 at the Weaman Street workshop for the Brompton Oratory (see Watt 1999, p. 35, reproduced). In Lanning Roper’s guide, The Gardens of Anglesey Abbey, Asclepius was placed ‘opposite the entrance to the Herbaceous Garden’ (Roper 1964, p. 67). Alice Rylance-Watson 2019