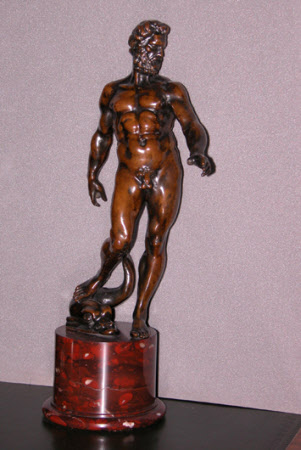 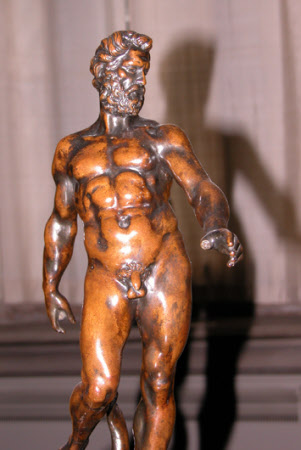 Bronze, Neptune, Italian School, after Giovanni Bologna (Giambologna, 1529-1608), c. 1850-1900. A bronze reduction of the statue of Neptune, god of the sea, that crowns the celebrated Neptune Fountain in the Piazza del Nettuno in the centre of Bologna. The fountain, made between 1563 and 1567, was the first major public work by the Flemish born sculptor Giovanni Bologna (Giambologna, 1529-1608), who worked in collaboration with the Sicilian-born architect Tommaso Laureti. Giambologna’s contribution was more than thirty bronze elements, the most important of which was the monumental bronze statue of Neptune. The statuette closely replicates Neptune’s pose, with the god reaching forward with his left hand, whilst his right hand is closed to hold the shaft of a trident. Under his raised right foot is a dolphin. The Neptune Fountain has been one of the most celebrated sights of Bologna since it was made. The bronze statuette, a glossy, highly finished bronze, with chestnut patination, was probably made in the late 19th century in Italy.

The commanding and elegant presence of the Neptune Fountain is felt throughout the complex of squares that form the historic centre of Bologna. The fountain has long been recognised as one of the great examples of Renaissance civic sculpture, an early masterpiece of the Italo-Flemish Renaissance sculptor Giovanni Bologna (Giambologna, 1529-1608). The fountain was conceived as part of a major programme of public works initiated between 1560-65 by Pope Pius IV’s Governor in Bologna, Pier Donato Cesi. These works also included the seat of Bologna’s University, the Palazzo dell’Archiginnasio, the central courtyard of which would have been embellished with the first version of Giambologna’s even more celebrated statue of Mercury, had not Cesi’s term of office come to an end. The fountain in the centre of Bologna is the physical and visual culmination of a vast complex of hydraulic systems which begin in the foothills surrounding the city and were necessary to feed the fountain. Largely surviving to this day, these sophisticated hydraulics have been the object of major recent studies (Richard J. Tuttle, The Neptune Fountain in Bologna. Bronze, Marble and Water in the Making of a Papal City, London 2015; Francesco Ceccarelli and Emanuela Ferretti, Il Nettuno, Architetto delle Acque. Bologna. L'acqua per la citta tra Medioevo e Rinascimento, Bologna 2018). The hydraulic systems were designed and engineered by the Sicilian-born architect Tommaso Laureti (c. 1530-1602), who also played the major role in the design of the actual fountain in the Piazza del Nettuno. This masterly structure, within which run no fewer than 38 water jets, incorporates more than thirty bronze elements designed by Giambologna, including the famous crowning statue of Neptune. Giambologna went as a young man to Rome in around 1550. Some time in the later 1550s he settled in Florence, where he became court sculptor to the Medici Grand Dukes. He made his name with his full-scale model of Neptune submitted for a competition for another fountain, that in the Piazza della Signoria in Florence. Although he did not win that competition, the success of his model led to his first major commissions from the Medici and, no doubt, to the decision of Pier Donato Cesi to commission major works from him for Bologna. The Neptune Fountain was undertaken between 1563 and 1567. A medium-sized (78.6 cm.) bronze figure of Neptune in the Museo Civico Medievale in Bologna is generally thought to be the sculptor’s model for the fountain figure, to which it is very close in form (Inv. 1503; Charles Avery and Anthony Radcliffe (eds.), Giambologna 1529–1608: Sculptor to the Medici, exh. cat., London London 1978, no. 31; Charles Avery, Giambologna: The Complete Sculpture, Oxford 1987, no. 67, Plate 131). Bronze reductions of many of Giambologna’s famous large-scale works in marble and bronze, for example the Rape of the Sabine Woman or the Mercury, were made in Giambologna’s own workshop or by his close associates. However, small-scale statuettes of the figure of Neptune, on a monument that was not in the principal centres of Florence or Rome, are not known to have been made during the sculptor’s lifetime. The Anglesey Abbey statuette has a glossy surface and a chestnut patination that are not typical of bronzes produced in Giambologna’s workshop. Although it could have been made in the early twentieth century, it is most likely that it was made, in Italy, in the latter part of the nineteenth century, after the development of railways had made Bologna much more easily accessible to tourists, for whom the Neptune Fountain was one of the city’s great sights, as it is today. An impressive late 19th- or early 20th -century complete model of the fountain in a private collection, made from marble and bronze (Il Nettuno, Architetto delle Acque, no. 47), is crowned with a figure of Neptune of the same dimensions as the Anglesey Abbey bronze statuette. Jeremy Warren 2019