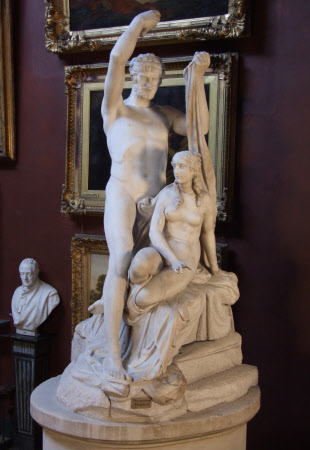 Marble sculpture group, Prometheus and Pandora by John Edward Carew (Tramore, County Waterford c.1782 – London 1868), 1835/37. A colossal marble statue of Prometheus, who stole fire from the gods, naked with upraised arm standing over a seated naked Pandora, his sister-in-law, wife of Epimetheus. Carew declared in 1837 that the Prometheus group 'was begun about two years since' and it remained unfinished after the third Earl's death in 1837. Carew claimed £4,000 'when finished' in his unsuccessful court action against Egremont's executors. In Greek mythology, Prometheus created the first man from clay, stole fire from the gods to give to mankind, was punished by Jupiter and released from his torment by Hercules. His sister-in-law was Pandora, the 'all-gifted' who was fashioned from clay by Vulcan. After Prometheus's theft of fire, Jupiter's retribution on mankind was to open Pandora's box, thus releasing all the world's evils. Only Hope remained inside.

Commissioned by the Third Earl of Egremont but unfinished at the time of his death in 1837. By descent, until the death in 1952 of the 3rd Lord Leconfield, who had given Petworth to the National Trust in 1947, and whose nephew and heir, John Wyndham, 6th Lord Leconfield and 1st Lord Egremont (1920-72) arranged for the acceptance of the major portion of the collections at Petworth in lieu of death duties (the first ever such arrangement) in 1956 by H.M.Treasury.

'Prometheus and Pandora' (painted on wooden plaque attached to base)