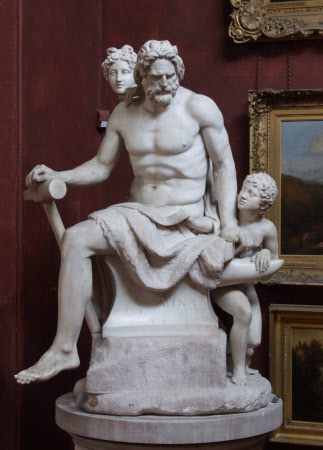 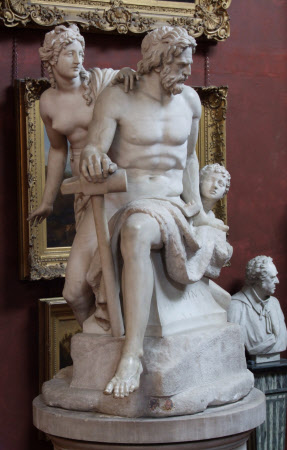 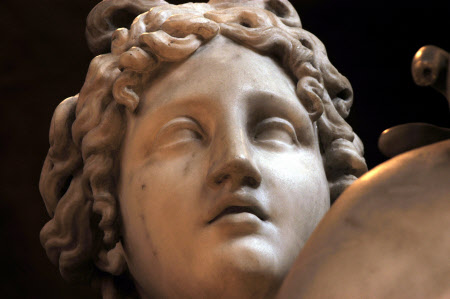 Marble sculpture group, Venus, Vulcan and Cupid by John Edward Carew (Tramore, County Waterford c.1782 – London 1868), circa 1827/8 - 31 A colossal marble statue of Vulcan, the god of fire and the blacksmith of the gods, identified with Hephaestus and sometimes called Mulciber 'the smelter', who is seated on his anvil inscribed AITNA (ie Etna, the Sicilian volcano) resting his hammer. He is accompanied by his wife Venus and her son Cupid, whose wings he forged. Commissioned as the pendant for Carew's other colossal sculpture group, Prometheus and Pandora and originally intended for the North Gallery. Both statues were subsequently (1836-7) moved into the Audit Room where they were placed on their present Portland stone pedestals supplied for £83.18.2d.

Collected by 3rd Earl of Egremont, thence by descent, until the death in 1952 of the 3rd Lord Leconfield, who had given Petworth to the National Trust in 1947, and whose nephew and heir, John Wyndham, 6th Lord Leconfield and 1st Lord Egremont (1920-72) arranged for the acceptance of the major portion of the collections at Petworth in lieu of death duties (the first ever such arrangement) in 1956 by H.M.Treasury.