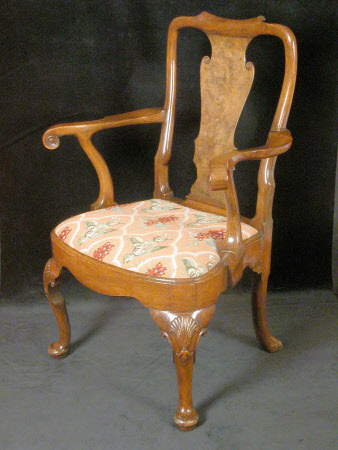 One of a set of twelve walnut dining chairs. After an accicdent in the Second World War, 3rd Viscount Bearsted was perscribed needlework for his recovery. Each chair has a similar style, but all have different patterns.

One of a set of twelve walnut dining chairs, English, early 20th century, of George I style, including a pair of armchairs, each back with scroll detail to the top rail and solid vase splat, the drop in seat in needlework depicting fruit and vegetables in trellis pattern (carried out by the 3rd Lord Bearsted), on shell carved cabriole legs with pad feet.